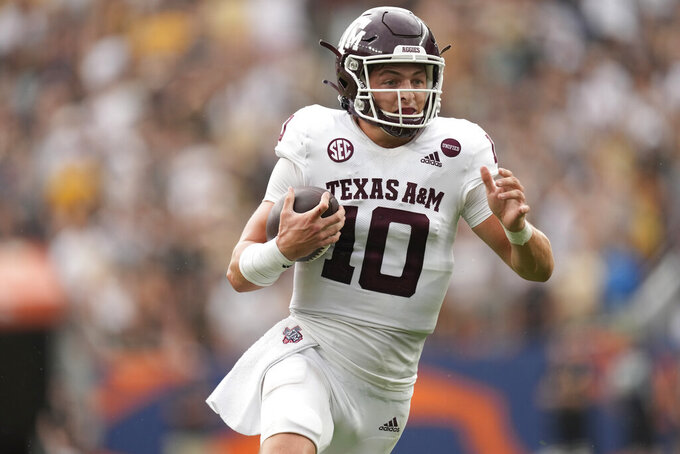 Line: Texas A&M by 30 ½, according to FanDuel Sportsbook.

Looking to extend their winning streak to 11 games, the Aggies need to get their offense going this week after a subpar performance in a 10-7 win over Colorado. This game is Texas A&M’s final non-conference tune-up before the Aggies open Southeastern Conference play Sept. 25 against No. 20 Arkansas. A win would give them their first 3-0 start since opening the 2016 season with six consecutive wins.

Texas A&M QB Zach Calzada will get his first career start Saturday after Haynes King had surgery to repair a broken leg this week after being injured against the Buffaloes. He’ll face a New Mexico team that ranks 74th in the nation after allowing 214.5 yards passing through the first two games. Calzada had some ups and downs against Colorado after King was hurt. He lost a fumble near the goal line with about nine minutes left but bounced back to throw an 18-yard TD pass with 2:41 remaining to give the Aggies the win.

New Mexico: QB Terry Wilson, a transfer from Kentucky, threw for a career-high 381 yards with three touchdowns last week to earn Mountain West offensive player of the week honors. Wilson has thrown for 559 yards and six touchdowns without an interception in two games this season.

Texas A&M: RB Isaiah Spiller needs 54 yards rushing to pass Johnny Manziel (2,169) and move into 17th on the school’s career rushing list. Spiller had 113 yards rushing in A&M’s opener but is looking to rebound this week after he was limited to just 20 yards rushing on eight carries against Colorado.