No. 7 Auburn's sluggish ground game still a work in progress 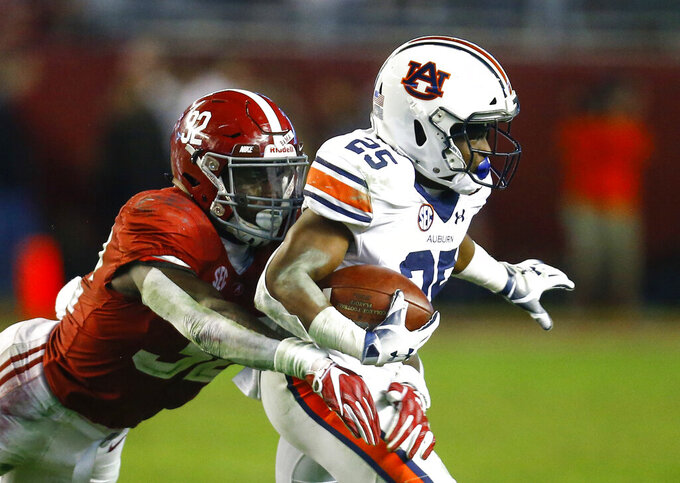 The Auburn Tigers once seemed virtual locks to have at least one 1,000-yard rusher every season.

After a two-year drought in that category, the seventh-ranked Tigers (1-0) are off to a slow start in the running game and likely still searching for a go-to tailback. They'll continue that search Saturday against one of the Southeastern Conference's best defenses Saturday at No. 4 Georgia (1-0).

Auburn's ran for just 91 yards on 30 carries in the opener against Kentucky, and quarterback Bo Nix was the leading rusher with 34 yards.

The 5-foot-7, 179-pound Shaun Shivers got the start and gained 29 yards. The tailbacks produced just 65 yards on 20 carries, but Shivers expresses confidence that it was just a first-game issue.

“We know what it takes,” Shivers said. "We’re all just one play away from breaking it. We just have to get the running game going because Auburn is known for running the football. We just want to improve in that area.”

Shivers, D.J. Williams and freshman Tank Bigsby — Auburn's top rated recruit in the latest class — all got between six and eight carries. Nix and the passing game were more than good enough to carry the day for the Tigers.

But the backfield does remain a work in progress. Auburn is replacing leading rusher J aTarvious Whitlow, who left the program and ultimately landed at FCS Western Illinois.

Auburn coaches and players have little doubt about the talent in the backfield. The 5-foot-10, 208-pound Williams is the top returning rusher after gaining 406 yards as a freshman.

Redshirt freshman Mark-Antony Richards also could find his way into the mix.

With the season shortened to 10 games, all against SEC opponents, it's an uphill battle anyway to start a new streak with a 1,000-yard rusher.

The Tigers also had to replace four starting offensive lineman surrounding Nick Brahms, who himself only started five games last season. Coach Gus Malzahn feels like new offensive coordinator Chad Morris “can do a lot of different things in the run game.”

“I really feel like we’ll improve in the run game,” Malzahn said. “But having a lot of different things you can do, I think is really good. And I think that the more that we can settle in on five linemen, that gel up front will also help as far as the run game goes.”

The line and backfield are still works in progress.