No. 8 Florida ends up relying on defense again in opener 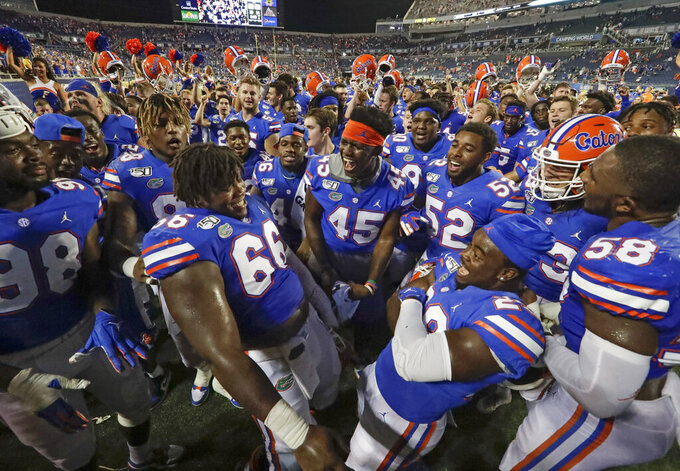 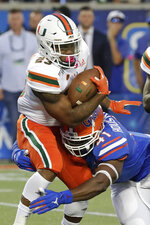 ORLANDO, Fla. (AP) — Defense has been Florida's identity for a dozen or so years, with the team developing more talent on that side of the ball and watching one successful coordinator after another leave for head coaching jobs.

Once considered a fluke, it has become a foundation.

And after another shaky performance from quarterback Feleipe Franks, the unit might have to carry the eighth-ranked Gators (1-0) again this season.

Aside from a few late lapses against Miami, Florida's defenders look poised to handle the load. The Gators finished with 16 tackles behind the line of scrimmage, including 10 sacks, and managed several stops down the stretch in a 24-20 victory Saturday night in the Camping World Kickoff.

"I've never been a part of something like that," said Greenard, a Louisville transfer who was in the backfield all game and finished with 1½ sacks.

The Gators have grown accustomed to that kind of defensive outing.

Todd Grantham's guys were at their best — and worst, really — in the closing minutes. Miami ran 13 plays inside Florida's 30-yard line in the final 13 minutes of the game and didn't score a point.

The Gators also were flagged repeatedly. Houston was penalized for unsportsmanlike conduct for a late hit out of bounds, and Florida was twice called for pass interference, including once on a fourth-and-34 play in which Wilson inexplicably pulled Thomas down well in front of the first-down markers.

But Florida followed with key stops after each gaffe.

"They never flinched when things didn't go well for us and that seemed to be whether we were missing tackles, whether we were getting penalties to give them first downs at key moments of the game," Mullen said. "They kept going and we kept finding a way to win and in the end, that's what you've got to do. ... It's hard to coach that effort, that strain and that desire to find a way to win."

The defense also got little help from Franks, who threw two interceptions in the fourth quarter. The first pass sailed high over the middle, got tipped and was picked off by Amari Carter. The second one was even more errant, ending up right in linebacker Romeo Finley's hands.

"Obviously, I didn't go out there and try to throw a pick," Franks said, adding that he got hit while he was trying to throw the ball away. "It's all about just trying to persevere through those kinds of things."

The defense certainly did its part. And it might need to do more going forward unless Florida's offensive line improves and Franks makes better decisions.

"It seemed like we had to win the game about four different times, but we continued to do that," Mullen said. "I'm really proud of that."