Penn State to work Levis into QB rotation with Clifford 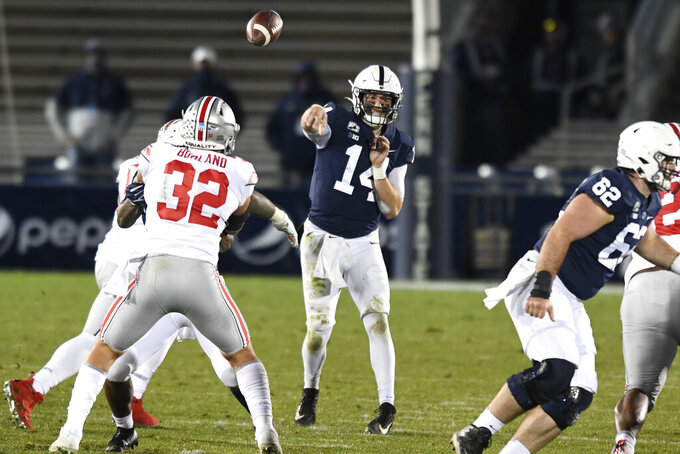 STATE COLLEGE, Pa. (AP) — James Franklin wasn’t going to bench Sean Clifford during a lopsided loss to Maryland, and the Penn State coach is not about to turn away from his quarterback despite Penn State’s winless start.

Still, Franklin would like to get his team's embattled starter some help. That could come as soon as this weekend at Nebraska. The Nittany Lions will try to avoid an 0-4 start by potentially using two quarterbacks.

“We need to get (backup) Will (Levis) involved in a lot of different ways, to help Sean out and also to continue investing in Will,” Franklin said Tuesday. “I think you’ll see that moving forward. Not just this week, but for the rest of the season.”

Levis has come to the offense’s aid in the past. Now Franklin is hoping the bullish runner can provide an additional dimension for a group that has yet to get on track. The Nittany Lions (0-3) rank in the bottom half of the Big Ten in nearly every major offensive category.

They’ll limp into Lincoln with the nation’s 84th-ranked scoring offense led by a second-year starter who’s been battered physically and mentally to start the season.

After absorbing six sacks over the first two games, Clifford was brought down seven more times in Penn State’s loss to Maryland last week. He tossed a pair of interceptions, fumbled once and completed just 47% of his passes on 57 dropbacks.

“I’m not going to point a single finger,” Clifford said. “There’s plays that need to be made and I need to make them.”

Clifford traded his filthy, grass- and dirt-stained uniform for a shirt adorned with shamrocks after the game. When he emerged from the locker room, he stared straight ahead, at times fixing his gaze downward while speaking to reporters.

The fact that the 6-foot-2, 217-pound quarterback is the team’s leading rusher with 15 more carries than running back Devyn Ford indicates to his teammates that Clifford isn’t ready to give up.

A Nebraska secondary that’s allowing opponents to complete 75% of their passes, but has only allowed four touchdown tosses, will be the next challenge.

“He wants the ball in his hands, and he wants to be able to make plays,” tight end Pat Freiermuth said. “Cliff’s a very good runner with the ball. He makes good cuts and good reads and I think that’s the beauty of our offense.”

But that willingness to tuck the ball and take off when the pocket breaks down — something Clifford has been forced to do more this year — has exposed him to hit after hit.

Levis, who checks in at 6-foot-3 and 222 pounds, also doesn’t shy away from contact.

He subbed for an injured Clifford last year against Ohio State where he turned in 18 carries for 34 yards and a touchdown in a 28-17 loss. He added 17 carries for 108 yards in a win against Rutgers to close the regular season. He completed 28 of 47 passes for 223 yards with a pair of touchdowns and interceptions last year.

Levis has rarely been called on this year. He’s got two carries for a yard and hasn’t dropped back to pass. He also lost a fumble in the opener against Indiana.

“We need him to be productive,” Franklin said. “To be honest with you, there’s an aspect when you put him in the game, they’re not expecting it, Will can chuck it.”