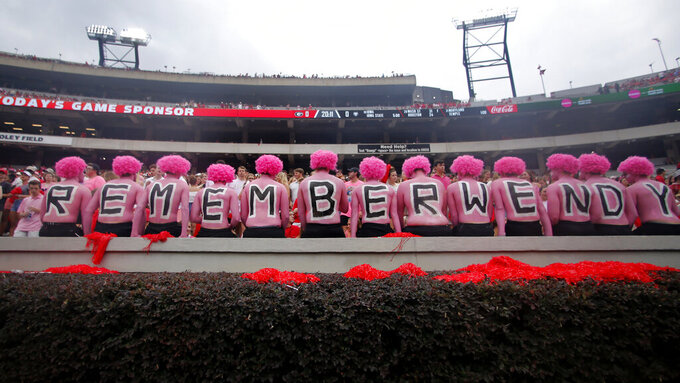 Georgia fans observe a moment of silence in horror of Wendy Anderson, wife of Arkansas State head coach Blake Anderson before an NCAA college football game Saturday, Sept. 14, 2019, in Athens, Ga. Fans were encouraged to "pink out" the stadium for Wendy Anderson who died from breast cancer in August. (AP Photo/John Bazemore)

ATHENS, Ga. (AP) — As Blake Anderson thought about all that pink between the hedges, he struggled to hold back the tears.

The emotions are still very raw for the Arkansas State coach, whose wife Wendy died last month after a two-year fight against breast cancer.

But even as time eases the pain, he'll never forget all those Georgia fans who honored his spouse on Saturday by wearing pink instead of red.

"It has been a really emotional week," Anderson said after the Red Wolves were routed by the No. 3 Bulldogs 55-0 on Saturday. "I just want to say publicly: one of the classiest moves I've ever seen. It's hard to truly prepare for something like that."

His voice cracked, but he managed to hold it together.

"I would say thank you to all those who showed up today wearing pink or thinking pink," Anderson said. "They don't know my wife and they don't know me and they didn't have to do it. I'm very grateful and honored and obviously overwhelmed."

His players were equally moved by the gesture, which began with a plea on social media and quickly spread throughout the week.

"I'll be a Georgia fan the rest of my life," Arkansas State center Jacob Still said.

It appeared that at least a third of the fans in the announced crowd of 92,746 were wearing pink attire. Shirtless students in the first row behind the Arkansas State painted their upper bodies pink and wrote "Remember Wendy" across their backs. Another fan came in the "pink nightmare" bunny suit made famous in the movie "A Christmas Story."

"Driving up to the game, seeing the fans walking into the stadium wearing pink, it really meant a lot to me," Still said. "But people will probably never understand how much it meant to coach Anderson. It just puts everything in perspective, college football and all the athletes, this is bigger than football. Georgia didn't have to do that. It just shows that Georgia fans have big hearts and they care and we're all kind of in this thing together."

Anderson, who's in his sixth season as the Red Wolves coach, was very public about his wife's struggles against cancer.

Finally, as she approached her final hours, he took a leave of absence to be with Wendy and their children. She died on Aug. 19 "as peacefully & gracefully as you could ever hope," Anderson wrote on Twitter the next morning. She was 49.

Anderson missed Arkansas State's opening game, a 37-30 loss to SMU, but he surprised his players by turning up in Las Vegas last weekend for their second game at UNLV.

Clearly inspired by his presence, the Red Wolves cruised to a 43-17 victory.

Arkansas State was never in the game against Georgia, falling behind 34-0 by halftime. The Bulldogs finished with a staggering 656-220 edge in total yards.

"I wish the game would've gone differently," Anderson said. "I think we've got a better team than we showed today. I think we have a lot of work to do. Hopefully we got out of it somewhat healthy because I think we have a very good possibility of a good season ahead of us if we can just continue to learn and grow."

Despite the outcome, this one will always hold a special place in Anderson's heart.

It was the perfect way to honor his wife.

"I feel her presence out there," Anderson said. "She's as competitive as I am and supported what we did and all those kids. That's the kind of legacy that keeps you going. I don't want to let her down, either, and her legacy. I've never seen anybody fight as hard as she fought the last two years. If I'm feeling sorry for myself or being lazy, I've got to live up to her legacy."