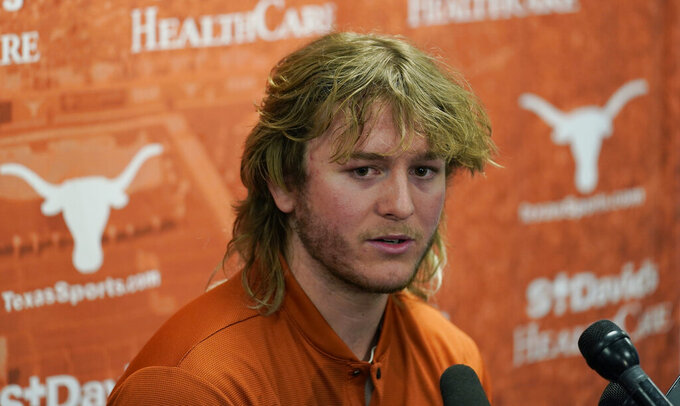 AUSTIN, Texas (AP) — Freshman Quinn Ewers was named the starting quarterback at Texas because he's a talent who can “make all the throws," Longhorns coach Steve Sarkisian said Monday.

Sarkisian announced last week that Ewers would get the start over Hudson Card in the Sept. 3 season opener against Louisiana-Monroe and presumably a week later against No. 1 Alabama. There's little reason to project beyond that because Card was the starter for two games last season and then lost the job after a blowout loss to Arkansas.

“I think Quinn provides the ability to make all the throws in our system. I think he’s got playmaking ability. He’s got natural passing ability,” Sarkisian said in his first public comments since announcing the decision. “It was a tough decision."

What Ewers doesn't have is much experience. He hasn't played meaningful football since his junior year of high school.

Ewers was one of the top-rated recruits going into his senior season at Southlake Carroll High School near Dallas in 2021 and enrolled early at Ohio State. But after a season on the bench in Columbus deep down the depth chart, Ewers headed back to his home state.

He arrived in time for spring practice to start a full-blown competition with Card, who wasn't ready to concede his second chance. Sarkisian announced his decision Friday, a day before the team held its final closed scrimmage of preseason training camp.

"I think they’ve worked well with one another, but they’ve focused on themselves,” Sarkisian said.

Neither player was made available to the media on Monday.

Texas went 5-7 in 2021 in Sarkisian's first season in Austin. Quarterback Casey Thompson led the Big 12 in passing touchdowns with 24 but transferred to Nebraska.

Sarkisian said he's expecting some missteps from his freshman quarterback but put that on the coaching staff to work through.

“I'm a realist. We're going to have some growing pains, but that's OK. I still think we're a pretty good football team with key veterans in key spots that can help alleviate that," Sarkisian said.

Sarkisian would not commit to playing Card at some point in the first game, but he noted Card was needed several times last season and has to be ready to play when called upon.

“There's going to come a point in our season, whether it's one play or one drive or one game, or two games, we're going to need Hudson Card to (win) a championship,” Sarkisian said. “Hudson's job is to compete, to either make Quinn better or pass him.”