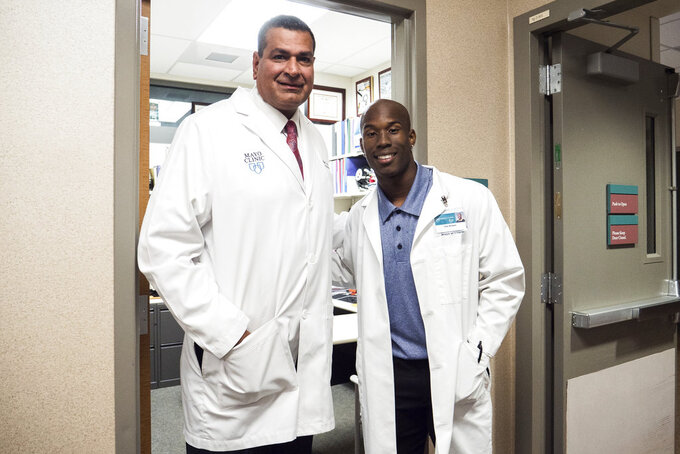 In this June 28, 2018 photo provided by Arizona State University Media Relations, Arizona State wide receiver Kyle Williams, right, poses with Dr. Anikar Chhabra, the team physician and director of sports medicine, at the Mayo Clinic in Scottsdale, Ariz. Summers are hardly a break for most college athletes, especially football players. Almost all take classes to lighten their loads in season. Still, many college football players work summer jobs and internships or do volunteer work. At Arizona State, receiver Kyle Williams is preparing to be a surgeon. (Arizona State University Media Relations via AP)

Kyle Williams was banged up during his freshman season at Arizona State, a shoulder injury that was not particularly serious. In fact, it turned out to be fortuitous.
The Sun Devils wide receiver was worked on by Dr. Anikar Chhabra, the team physician and director of sports medicine at the Mayo Clinic in Scottsdale, Arizona. Already interested in a career in medicine, Williams shared his curiosity with Chhabra.
"You could tell his mind was special in that he asked the right questions," Chhabra said.
Williams has spent the past two summers shadowing Chhabra at Mayo Clinic and working as a research intern. One of the better slot receivers in college football, the 19-year-old Williams has NFL hopes and very clear long-term goals in medicine.
Summers are hardly a break for most college athletes, especially football players. Almost all take classes to lighten their loads in season. While teams can't hold coach-led practices, players routinely organize their own activities. Plus, they need to hit the weight room. Even with recent NCAA rules that mandated more time off from required team events, there is not much downtime.
Still, many college football players work summer jobs and internships or do volunteer work. Penn State linebacker Koa Farmer has ridden along with law enforcement organizations in Washington in hopes of a future in forensic sciences. A couple of Minnesota defensive linemen worked at the zoo . Kansas State tackle Dalton Risner runs a blog that has spawned a foundation, and speaks to young people about faith and facing adversity. Memphis center Drew Kyser got a taste of what it is like to be a firefighter.
Williams — his teammates call him "Doc" — is preparing to be a surgeon.
"Whenever they have recruits come in they say, 'You know this guy's going to be a surgeon?' I'm like, 'Man, stop jinxing me,'" Williams said.
Math and science have always been Williams' strong suits. A possible career in medicine led him to a bio-medical engineering major when he arrived at Arizona State from Murrieta, California, southwest of Anaheim. Having clicked with Chhabra, a former basketball player at Harvard, Williams asked to take a peek into the life of a surgeon.
"After I went and shadowed him the first day, I went back and called my parents and my brother and said 'I think I want to be a surgeon, Mom,'" Williams said. "It's awesome what they do in helping people with their lives."
Williams has assisted with patient rounds at Mayo Clinic and observed knee and shoulder surgeries, where he compares the teamwork it takes to get the job done in the operating room with football.
"For an athlete to make that correlation of being in the operating room and being on a team, it's very special," Chhabra said. "Because not everybody can see that connection. He was able to see that right away. His first day in the operating room he said, 'This is your game day.'"
As a research intern, Williams was able to directly merge his two areas of expertise, working on a study of NFL combine results and how they relate to NFL careers. He also wrote a textbook chapter about Chhabra's innovative in-office arthroscopy techniques.
"Obviously, with my assistance and the some assistance of some of my residents, but he did the significant majority of the work and he's the first author on the chapter for this book," Chhabra said. The book will be published early next year.
Williams caught 66 passes for 763 yards and seven touchdowns last season as a sophomore. He absolutely wants to pursue an NFL career. He said managing the workload of both his passions is not easy, but he feels well supported by coaches and academic staff.
Chhabra, 46, said he talks with Williams about time management, drawing on his experiences as a student-athlete to provide guidance. The doctor hopes Williams inspires other teammates to have big goals beyond football.
"College sports nowadays, it's very difficult to go to medical school," Williams said. "The practices last all day. It's hard to do the lab courses. People are working out year round."
That's fine by Williams.
"When this game tells me I'm done whether that's 10 years down the line or even if it's in the next two years after college, I will humbly accept it and start a medical career," Williams said. "I kind of look forward to both."
___
Follow Ralph D. Russo at www.Twitter.com/ralphDrussoAP and listen at https://www.podcastone.com/AP-Top-25-College-Football-Podcast
___
More AP college football: https://apnews.com/tag/Collegefootball and https://twitter.com/AP_Top25