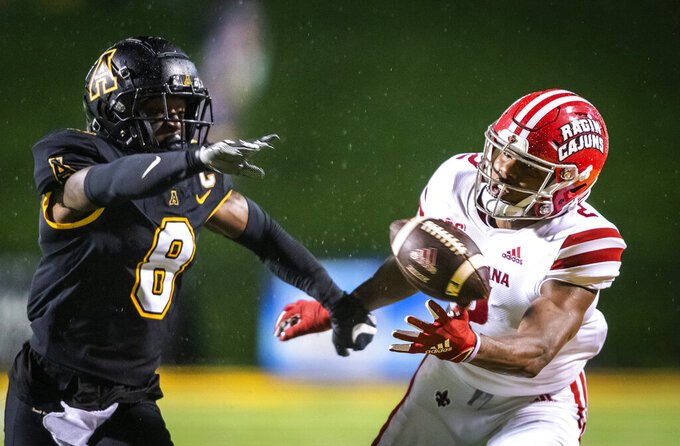 Louisiana-Lafayette is playing in its third bowl game in a row under coach Billy Napier. The Ragin' Cajuns were declared Sun Belt co-champions after they were denied a chance for a rematch against undefeated No. 9 Coastal Carolina, the only team to beat them (30-27 on Oct. 14). The Sun Belt championship game was canceled because of COVID-19 issues within the Chanticleers program. UTSA, with first-year coach Jeff Traylor, has a three-game winning streak and is one win away from matching the program record of eight set in 2012. UTSA said Traylor will not travel to Dallas for the game after he tested positive for COVID-19.

Louisiana-Lafayette: Senior QB Levi Lewis, 21-6 as the starter, joined Jake Delhomme as the only quarterbacks in program history with more than 6,000 career passing yards and 50 TDs. Lewis has led five game-winning drives in the fourth quarter, four this season. He has 2,128 yards passing with 17 TDs this season.

Louisiana-Lafayette RBs Elijah Mitchell and Trey Ragas are the only teammates who have recorded 1,100-yard rushing seasons in separate years, and both have more than 600 yards this season. ... The Roadrunners are playing in their first bowl game since the 2016 New Mexico Bowl, when they matched an NCAA modern startup record when playing in a bowl game in only its sixth season as a program. ... UTSA was initially headed to the Frisco Bowl, but that game was canceled after expected opponent SMU had COVID-19 issues. ... Louisiana-Lafayette can have consecutive seasons with at least 10 wins for first time in school history.