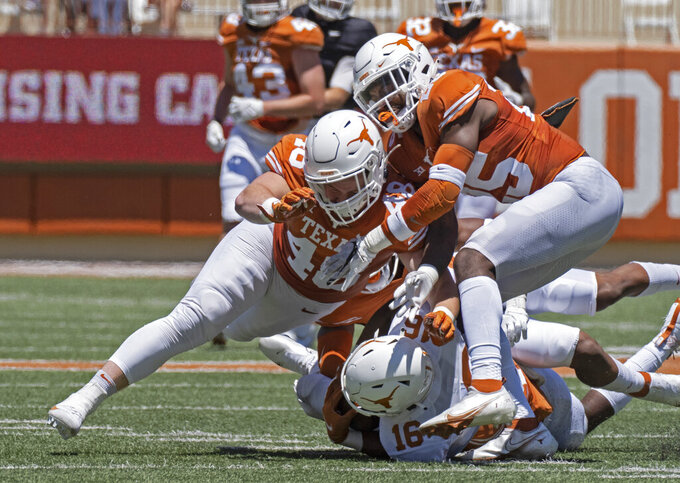 FILE - In this April 24, 2021, file photo, Texas defenders Jake Ehlinger, left, and B.J. Foster, right, tackle Kayvontay Dixon (16) during the first half of the Orange and White spring scrimmage college football game in Austin, Texas. Ehlinger, the younger brother of former Longhorns quarterback Sam Ehlinger, was found dead near campus Thursday, May 6, Austin police said. Officers found the 20-year-old Ehlinger after responding to a call at 12:18 p.m. Police did not detail how they found him but said the death is not considered suspicious. No cause of death was immediately released. (AP Photo/Michael Thomas, File)

Officers found the 20-year-old Ehlinger after responding to a call at 12:18 p.m. Police did not detail how they found him but said the death is not considered suspicious. No cause of death was immediately released.

Jake Ehlinger did not play the last two seasons after arriving as a walk-on from Austin's Westlake High School.

Sam Ehlinger was a sixth-round pick in the NFL draft last week by the Indianapolis Colts after a college career that saw him rank among Texas' career passing leaders.

“Our hearts are truly broken and we are just devastated today to learn of the passing of our Longhorn family member Jake Ehlinger. Jake was an amazing young man from an extraordinary family with such a bright future ahead of him. It’s just such a tragedy that we are really struggling with,” Texas athletic director Chris Del Conte said.

When Sam Ehlinger was drafted, Jake's face was accidentally shown on the NFL Network instead of Sam. “Jake deserves all the screen time you can get,” Sam joked with reporters.

Jake's death is the second tragedy to hit the Ehlinger family. Ross Ehlinger, Sam and Jake's father, died at age 46 in 2013 of an apparent heart attack while competing in a triathlon in San Francisco.

“Jake was a tremendous person and everything you could ask for in a student athlete,” new Texas coach Steve Sarkisian said. “In the short time we were able to get to know him, he always was a joy to be around and gave everything he had in workouts, meetings, practice and in life.”

Colts officials said the team would support Sam Ehlinger however it could.

“I know how close they were and we’re just really stunned, but we are prayerful and we know God has a plan," Colts owner Jim Irsay said. "We are doing everything we can to console the family and do what we can to make things as easy as possible at this difficult time.”