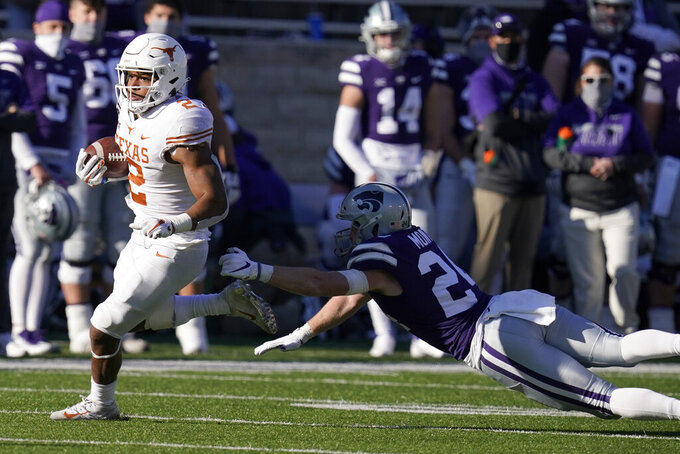 Texas running back Roschon Johnson (2) gets past Kansas State defensive back Brock Monty (24) during the second half of an NCAA college football game in Manhattan, Kan., Saturday, Dec. 5, 2020. (AP Photo/Orlin Wagner)

Coming into the game, Johnson had two touchdowns all season and Robinson hadn’t scored in his career. Robinson scored on runs of 12, 30 and 75 yards Saturday.

“I knew it would take time to learn to get a feel for the game,” Robinson said. “It feels good to play so free and comfortable out there. The college game is a different speed and such good athletic ability it took some time to progress.”

The Longhorns (6-3, 5-3 Big 12) scored seven times on the ground, three apiece by Johnson and Robinson and one from Jor Whittington. It’s the most rushing touchdowns allowed in a game in school history by the Wildcats.

“There’s a thousand bad habits that a freshman has to fix and he has,” Texas coach Tom Herman said. “We found a way to have fun and to play to the joy of football and for each other. I was really proud to see that today.”

Sam Ehlinger was 20 of 27 for 274 yards and two touchdowns. Kansas State’s Will Howard went 16 of 27 for 174 yards and a pair of touchdowns and two picks. Howard threw an interception for the ninth time this season and for the fifth straight game.

Deuce Vaughn continued his impressive season breaking the school record for rushing yards by a freshman (517). In the finale, he scored twice and gained 125 yards.

“I feel like I had a lot of fun this year,” Vaughn said. “There are things I can do better and I need to attack this offseason and come back next season ready to go.”

It’s the most points Texas has ever scored against Kansas State and the most points they’ve scored in a Big 12 game since 1996. The Wildcats hadn’t allowed 69 points in 13 years.

“Credit to Texas because they were ready to play today,” Kansas State coach Chris Klieman said. “We couldn’t stop them and ran out of players. We need to be better tackling up front, but their running backs played well.”

Texas scored 66 points in the first three quarters before calling off the dogs and sitting most of their starters the final 15 minutes.

The Longhorns secured their fourth straight winning season under head coach Tom Herman amid him being on the hot seat in Austin.

“I’m excited about that and for our players to send them out with another winning season,” Herman said. “We leaned on the older guys to tell the younger guys to ignore the noise. It was very much business as usual around here this week.”

With rumors running rampant about the future of the leadership at Texas, there was one way Herman kept focused on just Kansas State this week.

“I don’t listen to it,” Herman said. “When you don’t get on the Internet and stay on Yahoo and Words with Friends you stay above the fray a little bit.”

Herman remained undefeated against Kansas State in his tenure, but a 1-4 record versus rival Oklahoma is a glaring blemish that isn’t overlooked by the Longhorn faithful.

Kansas State lost their last five games after starting the season 4-1. It’s just the second time since 2010 that the Wildcats lost its home finale.

Texas running backs were too much for the Wildcats averaging 10 yards per attempt.

The Longhorns travel to Kansas next Saturday.

Kansas State waits to see if they are selected for a bowl game.