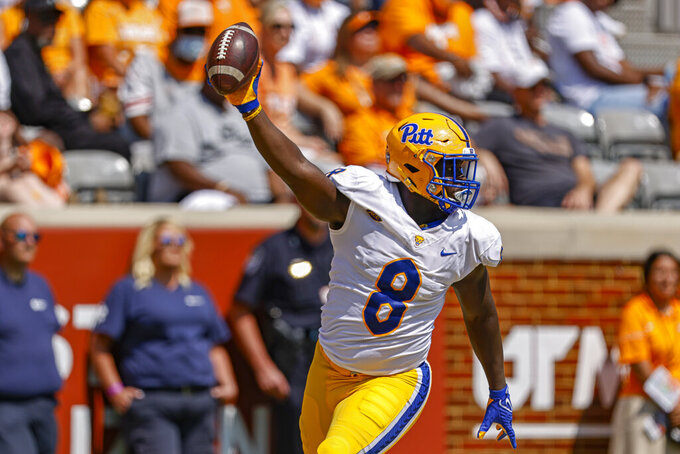 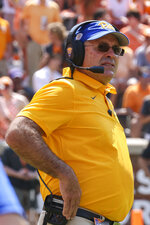 Yes, Pitt's impressive 41-34 victory at Tennessee last weekend provided a sense of joy and relief for Mack, who played in just eight games in 2020 due to a pair of injuries that required surgery. Yet he doesn't view his four-catch, 100-yard performance as proof he's all the way back to the form he showed during a solid 2019 when he hauled in 63 passes and three scores. That would be underselling himself.

The unbeaten Panthers (2-0) have slightly more modest expectations after becoming the lone member of the Atlantic Coast Conference to knock off a Southeastern Conference opponent so far this season. As great as it was silencing the orange-clad crowd on the road, Mack knows it will mean little if Pitt can't keep it going starting Saturday against Western Michigan (1-1).

“We’re not going to the college playoff after that (Tennessee win),” Mack said. “We’re not ranked after that game.”

No, but the path to the polls — and potentially a lot more — is now wide-open for the Panthers, who will have every chance to be a threat in the ACC's perpetually unpredictable Coastal Division.

Pitt hosts the Broncos and New Hampshire over the next two weeks before starting ACC play, meaning the school's first 4-0 start since 2000 is within reach.

Then again, the Panthers' relationship with success has been tricky at best. The program has just one 10-win season since 1981. Still, coach Pat Narduzzi believes his senior-laden group will be careful not to get ahead of itself.

“I think we have a mature football team,” Narduzzi said. “You know, we will not overlook anybody.”

While Western Michigan appeared overmatched while falling at Michigan in the season opener, the Broncos destroyed FCS-opponent Illinois State last week and was picked to finish a close third in the Mid-American Conference's West Division.

“When you put the tape on, they are well-coached," Narduzzi said. “They are tough. They are physical and they play hard.”

It's a mindset Narduzzi has tried to instill in the Panthers since he arrived on campus in December 2014. The results have been mixed at times, but the first two weeks of his seventh season have offered a hint that a true breakthrough in 2021 might be possible.

Pitt's running game remains very much a work in progress — neither Vincent Davis or Israel Abanikanda is averaging more than 3.6 yards per carry — but there were signs of progress late against Tennessee.

The Panthers were nursing a seven-point lead when they got the ball back with 4:32 to go. Five straight runs netted two first downs and allowed Pitt to run out the clock.

“So I feel like we can run the ball when we need to,” Narduzzi said. “Again we have to do a better job executing some of the things up front.”

While it's the first meeting between the two schools, there's more than a little familiarity between Pitt and Western Michigan. Three members of the Bronco secondary — Bricen Garner, Therran Coleman and Dorian Jackson — are all from the Pittsburgh area, with Garner and Coleman transferring to Western Michigan after playing at Pitt.

“So that does help when you know somebody a little bit better but they are both good football players,” Narduzzi said. “They were ACC football players. Played a lot of downs here, and two unbelievable kids I can’t wait to see after the game.”

Pickett isn't just getting it done with his arm. He now has 16 rushing touchdowns in his career, tying Rick Trocano’s team record for most ever by a quarterback. Perhaps just as importantly, Pickett is taking care of the ball. He hasn't even flirted with an interception in his first 82 pass attempts this season.