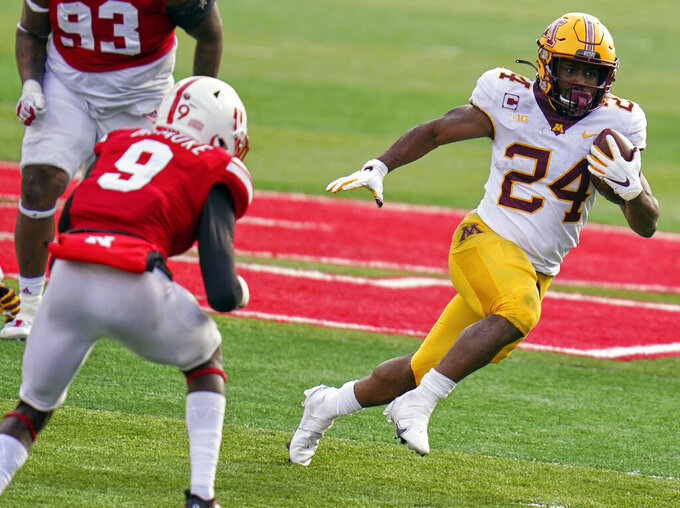 FILE - In this Dec. 12, 2020, file photo, Minnesota running back Mohamed Ibrahim (24) carries the ball away from Nebraska safety Marquel Dismuke (9) during the second half of an NCAA college football game in Lincoln, Neb. As college athletes like Ibrahim begin making money from the use of their names, images and likenesses, concerns are being raised over how the new rules will affect team chemistry. (AP Photo/Nati Harnik, File)

Ohio State freshman Jack Sawyer already has a new truck thanks to an endorsement deal under new rules that allow him to profit from the use of his name, image or likeness.

If any of the defensive end's teammates are jealous of Sawyer's relationship with actor Mark Wahlberg's auto dealership, they are so far keeping it to themselves.

“I think it’s great that guys are able now to go out, get these deals and get these things that they wouldn’t have been without NIL," said offensive lineman Luke Wypler, using the now-familiar abbreviation for the new form of athlete compensation. “Even like Jack’s truck and all those kind of things, I think those are great. I think that only promotes that it’s Buckeye Nation that these people around Columbus will help you and try to give you things and try to make you better."

The money has been flowing since the NCAA lifted its ban on NIL money July 1. Many deals are modest but some athletes have inked deals with substantial money; Alabama quarterback Bryce Young has a deal approaching seven figures, according to his own coach.

There is some concern the sudden wealth might widen the divide between the haves and have nots and disrupt one of the most important intangles in sports: team chemistry.

Hall of Fame basketball coach Geno Auriemma of UConn, whose team includes Paige Bueckers, the biggest star in women's college basketball, warns that NIL will not be equitable. He said he's happy that athletes like his sophomore guard, who already has trademarked the name “Paige Buckets," can make money while in school.

“But don’t be complaining when your favorite team falls apart because five guys are transferring, because they don’t like the fact that five other guys are getting a lot of money," he said.

Warner said it's possible that some college teams, especially in low-revenue sports, may disappear entirely if companies and organizations shift their marketing spending to athletes instead of an athletic department. And she wondered what might happen to the team dynamic when some players begin making more money than some of their coaches.

Nefertiti Walker, the chief diversity officer at the University of Massachusetts, said it is clear NIL will provide some needed financial opportunities for minority athletes. But she fears that there will also be negative impacts on gender and racial equity.

“We as a society absolutely idealize what the perfect athlete looks like, which is male and most often white,” she said. “I think that those who are coming to support college athletics through name, image, likeness-type contracts, they're going to be falling victim to these same sort of racialized gender biases. There's also going to be a bias for those who appear to be most straight.”

She noted that in women's basketball, where women of color make up the majority of the players, it is Bueckers, a blonde, white woman, and another white player, Stanford's Cameron Brink, who have made the headlines by signing big marketing deals.

Less than two months into the NIL era, some players say they are aware of the potential for divisiveness and are are actively working to combat it.

Minnesota quarterback Tanner Morgan and running back Mohamed Ibrahim said they are donating money from an autograph session to their offensive line.

That level is sharing is one thing, but some schools have already set up group licensing deals that should benefit every participating athlete in the program. Ohio State Ryan Day wondered last month whether other revenue sharing arrangements might be set up in the future.

Nebraska center Cam Jurgens said most players understand that higher profile athletes are going to make the most money and he has no problem with that. But Jurgens noted that it's not just the big names who can cash in; the Nebraska native has begun marketing products under the brand name “Beef Jurgy.” Fellow linemen at both Notre Dame and Wisconsin have deals with local barbeque restaurants.

“Do you think people in the NFL are upset that Patrick Mahomes is getting paid so much money in endorsements?” Jurgens asked. "I think they’re happy that he’s on their team and he’s playing football for them and they’re a winning team,”

And his coach, Scott Frost, may even be using NIL as recruiting tool for Nebraska.

“Nebraska football players and student athletes are uniquely positioned to take advantage of this because of the fan interest in Nebraska," he said. "It’s the only show in town. All eyes are on them. I expect our our players to do as well as anyone in the country with this when the dust settles.”

That may hold true in Connecticut as well, where UConn dominates the sports news. But if Bueckers is the only Husky who ends up cashing in, her teammates say they are fine with that.

“It doesn’t matter if I’m making $2 and Paige is making a million,” said guard Evina Westbrook. "OK, dinner is on you. That’s how I see it.”