After 2 canceled games, Utah set to open against No. 20 USC 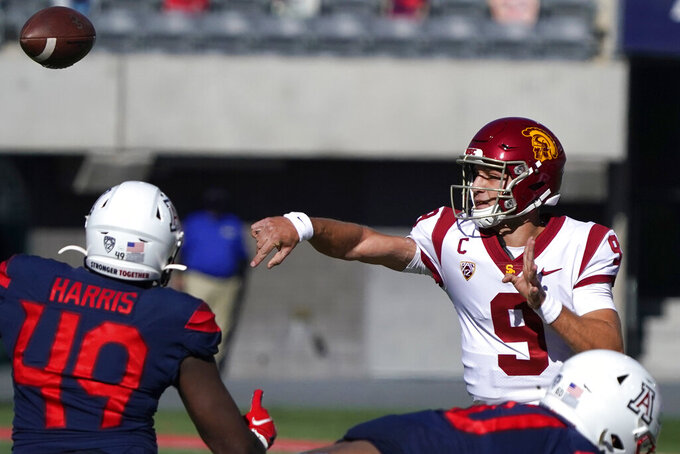 No. 20 USC faces defending Pac-12 South champion Utah, which will kick off its season after cancelling the opening two games due to COVID-19 cases. The Trojans have lost in their last three visits to Rice-Eccles Stadium. It’s a late start and the weather could be a factor with the low expected to be around 26 degrees. The coldest game in USC history was 20 degrees and in the snow during a 40-12 loss at Notre Dame in 1957.

Trojans quarterback Kedon Slovis ranks sixth in the nation in both yards passing per game (353) and completion percentage (71.4%). He’s also thrown three touchdown passes and has one interception. The Utes saw three of their starting defensive linemen last season taken in the NFL draft. They do have back junior Mika Tafua, who registered three sacks and recovered a team-best four fumbles in earning All-Pac-12 honorable mention honors.

USC: OLB Drake Jackson, who made big plays late against Arizona State and Arizona to help the Trojans wrap up wins. Jackson has eight tackles, three for loss, and two sacks this season.

Utah: QBs Jake Bentley, Cameron Rising and Drew Lisk. All are listed as No. 1 on the depth chart for Utah. Coach Kyle Whittingham has told the team his choice, but wants to keep his opposition guessing.

The Trojans face a team opening its season for a third straight week. ... Utah is looking to win a 13th straight season opener. ... Whittingham has a 131-64 record, ranking him as the second-winningest head coach at Utah behind Ike Armstrong (141-55-15). ... The Utes are the ninth-most youthful team in the nation, according to research by the school. ... Utah boasts a 70-24 mark in Salt Lake City in the Whittingham era. The Utes were undefeated last season.