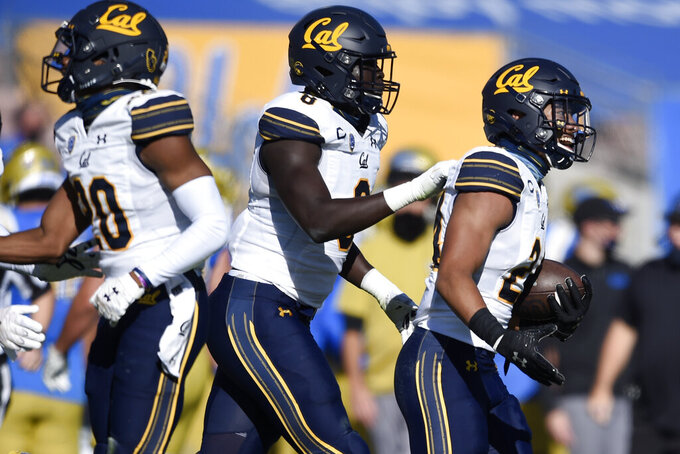 California cornerback Camryn Bynum, right, celebrates after intercepting a pass during the first half of an NCAA college football game against UCLA in Los Angeles, Sunday, Nov. 15, 2020. (AP Photo/Kelvin Kuo)

California played a much-needed impromptu game last week, but the outcome wasn’t what the Golden Bears had hoped. Little has gone the team's way this season.

Heading to Corvallis on Saturday, Cal (0-1) looks to rebound against winless Oregon State.

Moments after Sunday's 34-10 loss to UCLA at the Rose Bowl, California defensive end Zeandae Johnson was already looking ahead to the Beavers.

Cal's season has been a series of setbacks. Statewide and local regulations hampered the Golden Bears' ability to practice before the start of the season, and then a positive COVID-19 test and contact tracing forced the cancellation of the season opener at home against Washington.

It appeared that Cal would be on the sidelines again last week when opponent Arizona State had an outbreak and had to cancel. But coach Justin Wilcox got together with pal Chip Kelly, coach at UCLA, and within some 48 hours put together a game at the Rose Bowl on Sunday.

The resulting loss stung, but at least it was a game.

“I believe in our team and I know we’re going to get better,” Wilcox said. “I think all of our guys are disappointed. I know I am. We didn’t perform as well as I thought we could, and you’ve got to give UCLA credit.”

Because of the short notice, Cal had a simplified game plan for the Bruins. That puts Oregon State at a bit of a disadvantage when it comes to scouting.

“As well coached as any team in this league,” Oregon State coach Jonathan Smith said. “Got a lot of returners coming back. Defensively, they've been really good for years now. Plan on seeing that same kind of challenge."

STAND BY YOUR MAN

Oregon State quarterback Tristan Gebbia, who took over as the Beavers' starter this season after Jake Luton moved on to the NFL, had a rough outing against the Huskies. Gebbia completed 11 of 24 passes for just 85 yards, and had two fumbles.

Smith said he is confident in his QB.

“He understands football. It’s not a game of perfect, he's not going to be perfect," Smith said. "I think he relishes the opportunity to get back in the ring and keep swinging.”

While Smith praised Cal's defense, it's a side that's struggled to start the season, particularly on the D-line. A positive COVID-19 case before the scheduled opener put the group into isolation after contact tracing.

But things were looking up with the line's return to practice this week.

“We’ll be better because, especially up front, the offensive line hasn’t touched anybody in 14 days with the D-Line being out. Going against UCLA was their first time going against a live defensive front in about two weeks. Having the D-Line will definitely help our guys up front,” Wilcox said.

Following the loss to the Huskies, Oregon State fans were angered by a call in the final quarter. On fourth-and-inches inside the Washington 5, officials ruled that Beavers running back Jermar Jefferson did not get a first down.

The Beavers were trailing 24-21 at the time. The Pac-12 on Sunday announced that after review there was not irrefutable video evidence to change the ruling on the field.

Oregon State AD Scott Barnes released a statement that said: “I am surprised and disappointed in the final review findings. I will always stand up for our football program, our coaches and student-athletes.”

Smith wasn't dwelling on it. He said the team talked about it, but there wasn't much to more to say.

“I’ve been coaching 20 years and I’ve never had a game where every single call was correct. We’re always going to deal with disagreements and it is what it is,” he said. "There’s nothing we can do to change it, so we’ve got to be focused on Cal.”