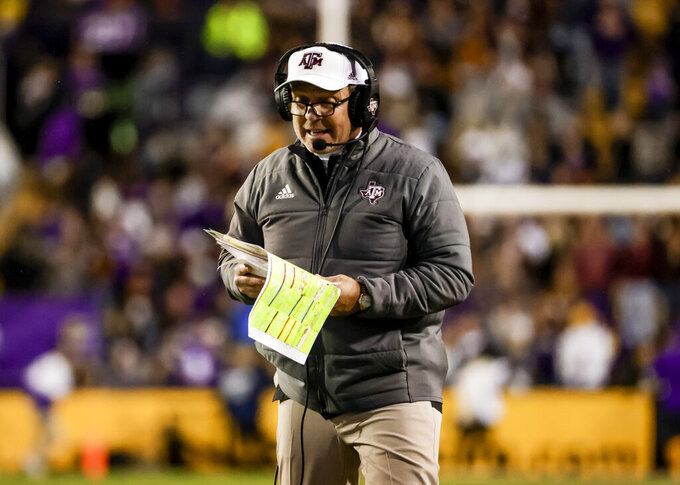 Through all the changes to the college sports landscape with money-making opportunities for athletes and open transfers, one thing remains the same.

A bunch of Southeastern Conference schools along with venerable programs like Ohio State and Texas are at or near the top of the national recruiting rankings.

The three-day December signing period opened Wednesday, with Texas A&M finishing the day with the lead according to the 247Sports Composite rankings.

Aggies coach Jimbo Fisher put together his fourth straight top-10 class. Alabama, which won nine of the previous 11 recruiting titles, was No. 2. Georgia was No. 3, marking the fifth straight year the Bulldogs have been in the top five.

The team rankings could change with the next letter-of-intent period beginning Feb. 2.

Coaches said the recruiting process now has players taking into consideration where they could make the most money through endorsement work. The NCAA in July began allowing athletes to monetize use of their name, image and likeness. Some schools are better positioned than others in this new frontier and millions of dollars are swirling around the biggest programs..

“NIL has been going on for a long time. It just hasn't been above board,” Fisher said.

The rapid increase in number of players entering the transfer portal and moving to another school with immediate eligibility has also changed the way coaches build their recruiting classes.

Instead of trying to sign a high school player and develop him, a coach might instead pursue experienced players in the portal. And players interested in transferring also might be looking at NIL potential.

All things considered, signing day isn’t what it used to be, Mississippi coach Lane Kiffin said.

“That’s basically your draft class,” he said, “but then you’re going to have your free agent class. I don’t think people really say it this way, but let’s not make a mistake. I mean, we have free agency in college football. The kids a lot of times go to where they’re going to get paid the most.

“No one else is saying that maybe, but the kid says, ‘This is what I’m getting here for NIL.’ It is what it is,” Kiffin added. “Free agency has been created in college football — except you can’t lock people into a contract. They can go any time. It’s a new world that we’re in.”

TOP OF THE HEAP

Texas A&M signed 12 players ranked in the top 100 nationally. Two of its three five-star prospects are defensive linemen: Walter Nolen of Powell, Tennessee, and Gabriel Brownlow-Dindy of Lakeland, Florida. The other is quarterback Conner Weigman of Cypress, Texas. The Aggies have 17 four-stars.

"I care a whole lot more about how they play," he said. “We've seen evidence of the guys who have played a big role on our team, some of those guys were not the guys we talked about on this day during their career."

Amid all the decommitments shadowing the coaching changes this fall, the most surprising came Wednesday when cornerback Travis Hunter of Suwanee, Georgia, rated the No. 1 overall national recruit, spurned Florida State to sign with Deion Sanders and Jackson State of the lower-tier Football Championship Subdivision.

There were some notable flips among four-star recruits:

Cincinnati's run to the College Football Playoff isn't all that helped Luke Fickell sign what's shaping up to be the Bearcats' highest-ranked class at No. 38. Other factors, he said, are the coming move to the Big 12 and the development of QB Desmond Ridder and CB Ahmad Gardner into NFL draft prospects.

“Were there some doors that could possibly open and some hurdles taken down? No doubt,” Fickell said of the upcoming move from the American Athletic Conference to the Big 12. “The biggest thing that has been a point of emphasis and a sticking point with a lot of recruits was the league and that P5 connotation... And winning takes care of a lot of things in a lot of ways.”

Five-star QB Walker Howard (Lafayette, Louisiana) made good on his pledge and signed with LSU and new coach Brian Kelly.

Howard was expected to follow through on his verbal commitment after appearing in a promotional video with Kelly on social media that led some to poke fun at the coach’s dancing.