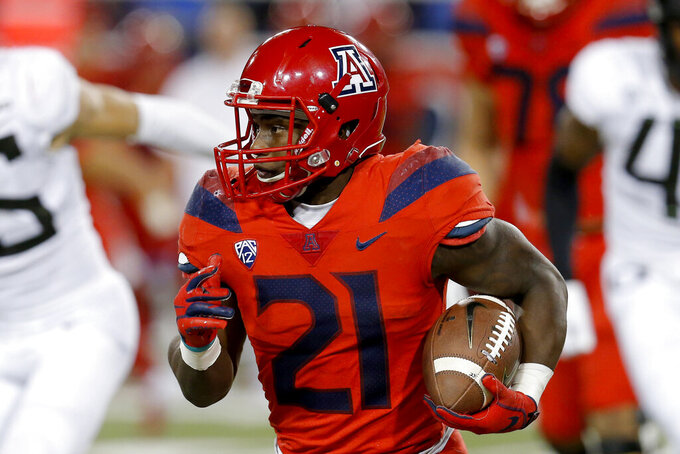 HONOLULU (AP) — Arizona's season-opening matchup against Hawaii will be a study in contrasting offensive styles.

While both teams ranked in the top 50 nationally in total offense in 2018, the Wildcats did a lot of their damage on the ground, averaging 202.4 rushing yards per game, which led the Pac-12. The Rainbow Warriors' pass-heavy attack, meanwhile, aired it out at a clip of 310.3 yards per game, tops in the Mountain West.

Arizona running back J.J. Taylor and Hawaii quarterback Cole McDonald are expected to take center stage when the teams meet Saturday for the first time since 2016.

"The scary part about this guy, McDonald, is he had a great year last year ... and he's coming back this year bigger and stronger, so they've got some weapons offensively and defensively, but I think they've got a quarterback that's as good as probably there is in the country," Arizona second-year coach Kevin Sumlin said.

McDonald has been named to the preseason watch lists for the Manning, Maxwell, Davey O'Brien and Johnny Unitas Golden Arm awards. Taylor is also on the Maxwell Award watch list, along with the Doak Walker Award.

"This is about all-out effort to the ball, this is about good tackling, this is about getting them down and seeing if we can get some takeaways because if they make you miss, they have the ability to take it as far as they need to go," Rolovich said.

The Rainbow Warriors are coming off an 8-6 record and their first winning season since 2010.

A few more things to look for when the Wildcats and Rainbow Warriors meet:

CONTINUITY COUNTS: Not only does Hawaii return 20 starters from a year ago — which ties them for the most in the nation with the quartet of Ball State, Indiana, Michigan State and Oregon — it also managed to go through the offseason without any turnover on its coaching staff.

Among the new additions to the Arizona staff this year is running backs coach DeMarco Murray, who played seven years in the NFL. Murray played his college ball at Oklahoma, where Sumlin served as co-offensive coordinator in 2007 when the Sooners won 11 games, including the Fiesta Bowl.

TRIBUTE TO TOMEY: Dick Tomey, who coached at both Hawaii and Arizona, will be honored Saturday. Tomey passed away in May at the age of 80 after a battle with lung cancer. Several of Tomey's family members will be in attendance and Arizona players will wear a "DT" sticker on their helmets in his honor.

YOU AGAIN: The Wildcats will open against the Rainbow Warriors for the third time in program history and are seeking their fourth win in Honolulu in as many tries. They have won all five previous meetings in the series, including a 47-28 win in Tucson the last time the teams met on Sept. 17, 2016. The two also met in a season opener in 1952, when Arizona hosted Hawaii and won 57-7, and in 1998, when the Wildcats made their last visit to Aloha Stadium and came away with a 27-6 win.

EARLY START: Saturday's opener will mark the earliest start to a season for both programs.

The teams will open the 2020 season against each other in Tucson.

Hawaii will take on two more Pac-12 opponents, Oregon State and No. 13 Washington, in the coming weeks.