Auburn trying to halt skid from top 10 to being unranked 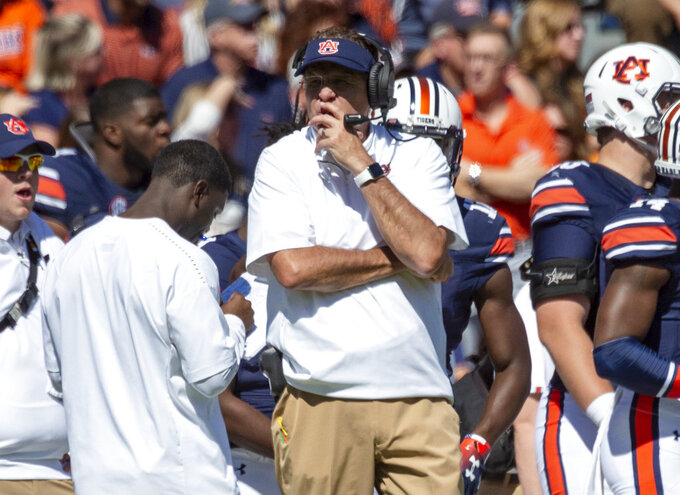 Auburn head coach Gus Malzahn looks on during the first half of an NCAA college football game against Tennessee, Saturday, Oct. 13, 2018, in Auburn, Ala. (AP Photo/Vasha Hunt)

AUBURN, Ala. (AP) — Auburn's hopes for a repeat SEC West championship have vanished along with its national ranking.

Now, the Tigers are scrambling to keep the wheels from falling off a once-promising season. Auburn (4-3, 1-3 Southeastern Conference) is trying to rebound from back-to-back losses at Mississippi State and Tennessee and start to reverse a rapid fall from a No. 8 ranking.

"Our guys are playing their guts out," coach Gus Malzahn said Tuesday. "We've been in every game. As a matter of fact, we had opportunities to win just about every game.

"But for whatever reason, we've not either seized the moment or made the play when we needed to make the play. Our guys are playing extremely hard. They're competitive."

A 30-24 home loss to Tennessee dropped Auburn from the Top 25 and left Malzahn searching for fixes. He said there would be "some tweaks" to the lineup leading up to Saturday's game at Mississippi (5-2, 1-2) but didn't provide any specifics.

The Tigers are standing by struggling quarterback Jarrett Stidham as their starter. Stidham was intercepted twice and lost a fumble that was returned for a touchdown against the Volunteers.

"Jarrett gives us the best chance of winning, and he's tough on himself," Malzahn said. "He knows the turnovers were tough, and he's disappointed. He's going to fight to do everything he can to get that corrected."

Auburn has also allowed 12 sacks in the past four games.

It's even gotten to the point where Malzahn was asked about his job security despite a new 7-year, $49 million deal with a hefty buyout. He said he doesn't feel like he's coaching for his job.

That adds to the challenge going against Jordan Ta'amu and the SEC's top passing offense. Auburn's defense had been mostly the strength of the team but Tennessee's Jarrett Guarantano torched the Tigers for 328 yards.

Auburn's remaining schedule leaves a winning record far from assured, particularly if the Tigers lose to Ole Miss. Games remain against No. 17 Texas A&M and at No. 8 Georgia and No. 1 Alabama.

Malzahn stressed he feels the team remains together and has kept competing until the end of games. But the realistic goals have changed significantly.

"Just give it everything we've got for these next five games, playing as a team, playing as brothers," H-back Chandler Cox said. "You know, playing for these seniors, including myself, because we've got five or six games left for the rest of our lives, really, in college."