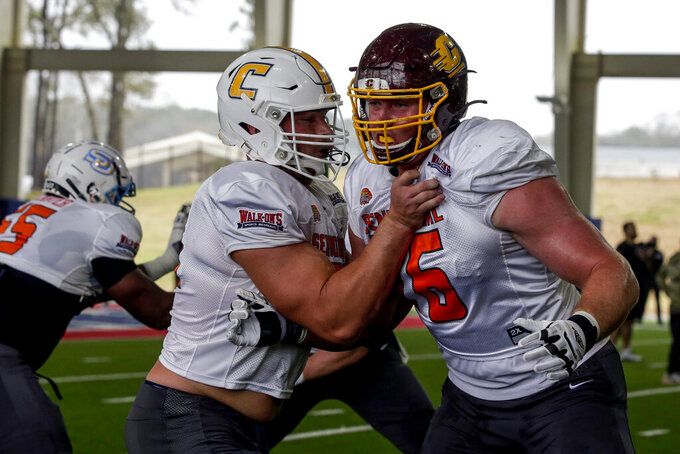 MOBILE, Ala. (AP) — Bernhard Raimann was 13 the first time he even saw one of those “egg-shaped balls” being tossed about in Austria but he swiftly fell for American-style football.

Once a wide receiver for the Vienna Vikings club team in Austria, Raimann made the trek to America and became a tight end for Central Michigan and finally a towering left tackle. Now, he is on the brink of an NFL career.

The 24-year-old former foreign exchange student is at the Senior Bowl and projected as one of the top offensive tackles in the upcoming NFL draft.

It’s been a long journey — literally — and one where he had to pack on pounds for a position change. But Raimann now seems to be right where he belongs: as a 6-foot-6, 304-pound tackle with a promising football future.

“I started playing soccer as most kids in Europe do,” he said. “But I was kind of getting sick of soccer. I was getting tired of it. It wasn’t physical enough for me, so I was looking for something new.”

Then a 13-year-old Raimann saw some buddies throwing the ball around; the first time he said he had even seen a football.

He quickly got hooked on the sport and joined the club team in Austria on his 14th birthday, playing receiver and cornerback for the Vikings. But he didn’t want to stop there, so he headed some 4,500 miles away to Michigan as a foreign exchange student a year later.

“I was like, hey, I want to play under the Friday night lights,” Raimann said. “I thought that was going to be awesome, which it was.”

The experience convinced him he wanted to continue playing in college. Once at Central Michigan, Raimann started to see the NFL as a potential destination.

Raimann was good enough to land a scholarship and after serving a mandatory stint in Austria’s military, he played two seasons for the Chippewas at tight end, where he was mostly used for blocking

He moved to left tackle in the spring of 2020 but only got in three practices at his new position before COVID-19 shut workouts down. The team only played six games that season, giving him about a season and a half of experience.

“He obviously had the frame and the feet to be successful at that position,” Central Michigan coach Jim McElwain said this week. “And not only that, he had the intelligence to learn it.

"I think of all the guys that I’ve seen go out, this guy’s upside, I really think he’s going to be way better in year 4-5-6-7 than he was in Year 1, because he’s still kind of learning the position.”

Raimann weighed just 237 pounds in June 2019 but reported back for the following season at about 285-290, Central Michigan strength coach Joel Welsh said. He eventually was able to hold steady at about 304.

Welsh said he’s still maintained enough athleticism at that size to play tight end in some capacity. The strength coach said Raimann took a strongly regimented approach to eating in order to pack on the pounds.

“He is a rarity. I have not been around that guy that has been such a self-motivated, independent guy,” Welsh said. “The word to use is pro. He’s just a pro.”

Raimann graduated with a double major in actuarial science and statistics and a 3.80 grade point average in May 2021. Then he started an accelerated master’s program in applied statistics and analytics.

But Raimann may not have to put those degrees to use just yet. He’s regarded as a likely early round draft pick and drew plenty of attention from scouts after that offensive line move.

“I’ll put it this way, there were a bunch of guys I hadn’t seen in a long time,” McElwain, a former Florida and Colorado State coach, said of the NFL scouts flocking around the Chippewas program. “And I was like, ‘What the hell are you doing in Central Michigan?’”

Of course, people might have wondered the same about Raimann at one point.