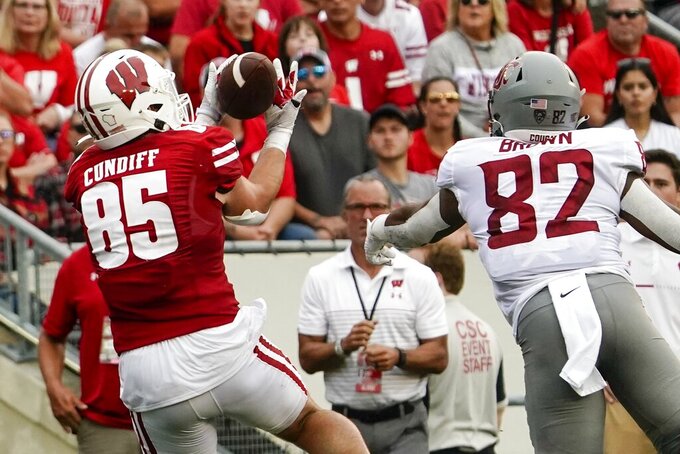 MADISON, Wis. (AP) — Wisconsin tight end Clay Cundiff is unavailable indefinitely but hasn’t been ruled out for the season.

Cundiff was carted off the field Saturday in the Badgers’ 52-21 loss to No. 3 Ohio State.

In the injury report released Monday, Cundiff is listed as unavailable for the Badgers’ upcoming game with Illinois due to an injured left leg. But he's not among the players out for the season.

Wisconsin coach Paul Chryst declined to offer a timetable for when Cundiff possibly could return.

Cundiff injured his leg as he went down after making a catch in the final minute of the first half at Ohio State. As he was carted off the field, just about every Wisconsin player left the sideline to greet him and offer support.

It's the second straight season in which Cundiff has been carted off the field with a major injury. He dislocated an ankle, broke his fibula and tore the deltoid ligament in his right leg last year in a 27-7 victory over Iowa, knocking him out for the rest of the season.

Cundiff came back from that injury and caught two touchdown passes in a 17-14 loss to Washington State earlier this season. He has nine catches for 142 yards to go along with those two scores.

“It’s tough trying to find words to provide the right context to that situation because I watched him come back last year and just that journey he had to go on from the Iowa game all through winter, spring ball and finally getting back during the summer,” tight end Hayden Rucci said. “I still don’t even have the words. It’s really tough because he worked his (rear) off every day to get back. He knows the journey he’s got again. He knows what to do. We’re all just behind him right now.”

Rucci and Jack Eschenbach figure to get most of the work at tight end while Cundiff's out.

“It was pretty heartbreaking. I know what an injury like that can do to someone mentally,” said Eschenbach, who dealt with shoulder and quadriceps injuries last year. “(For him) to kind of have to go through that all over again, it was pretty sad to see. But I know him very well and I know he's going to persevere through and he'll be back again eventually.”