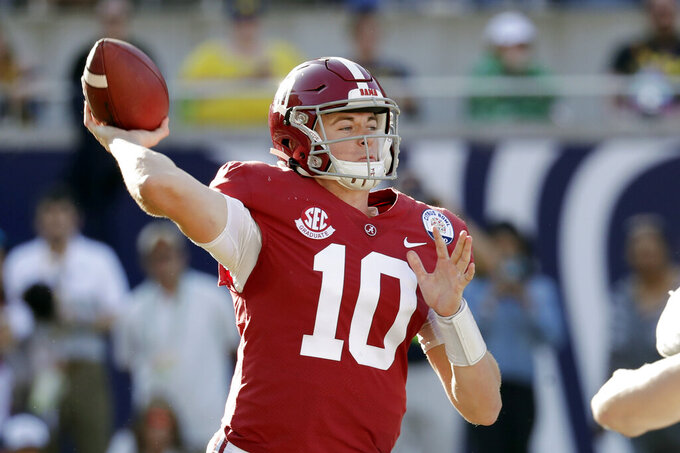 Alabama quarterback Mac Jones was a skinny three-star recruit who had to wait in a daunting line for a starting shot. Bo Nix arrived at Auburn as a prized recruit and has started every game since.

Jones has emerged as a Heisman Trophy contender and a worthy successor to Tua Tagovailoa, leading the top-ranked Crimson Tide into the game against Nix and the No. 22 Tigers. His days as a largely unheralded recruit destined to labor behind eventual NFL quarterbacks Tagovailoa and Jalen Hurts seem a distant memory.

“You know, people always give you a rating or whatever in high school, but once you step on campus that doesn’t really matter,” Jones said.

That goes both ways.

Nix arrived on campus with more acclaim as a five-star recruit and the son of a former Auburn quarterback, Patrick Nix. He also didn't get the time to ease into Southeastern Conference football and has had to learn on the job, with all the growing pains that entails.

Nix did help direct Auburn to a 48-45 Iron Bowl win in his first start in the bitter rivalry. Of course that was at home, not at Bryant-Denny Stadium even if it's before a crowd shrunken by pandemic rules.

“I think it gives me a lot of confidence, knowing that I’m going into a tough place," said Nix, who won a high school state title at the stadium. "Obviously we have a ton of guys coming back, a lot of the same skill guys that we had last year, and then obviously a lot of guys on the defensive side of the ball that do the same thing.

“So I feel comfortable. A lot of the guys that made big plays last year, they’re back.”

Jones made some big plays in last year's Iron Bowl, too, but couldn't overcome having two interceptions returned for touchdowns. He passed for 335 yards and four touchdowns after replacing an injured Tagovailoa for the last few games.

Now, Jones is one of the nation's top passers and directing one of the most dangerous offenses. He ranks third nationally in passing efficiency and yards per game with an average of 366. He's also second in yards per attempt (12.41) and completion percentage (78.5).

And he's among the leading Heisman contenders. Jones acknowledges he has the luxury of leading an offense loaded with stars like tailback Najee Harris and wide receiver Devonta Smith and a formidable line.

'"You see it on TV and stuff but I’m not on social media," Jones said of the Heisman hype. “All of that’s really is a distraction. We obviously have great players here and it probably makes me look a lot better than I actually am, and there’s players on our team that should be in that talk.”

His numbers are worthy of Heisman consideration, though it's a season where not all the likely candidates have had equal chances: 2,426 yards and 18 touchdowns against three interceptions. The 6-foot-3, 214-pound Jones, who arrived at closer to 180 pounds, has a lot more seasoning than he did in that last Auburn game.

Ditto for Nix since his three-interception performance when Auburn was upset by South Carolina. He has passed for five touchdowns and rushed for two more against just one interception in the three games since.

“It was a tough go, but when he bounced back we talked about it,” Auburn coach Gus Malzahn said. "He bounced back just like I knew he would. He’s been playing extremely well right now. I think you’ve seen him grow and get better each game.

"He’s still learning. A new coordinator (Chad Morris). A new offense. You’ve seen him grow. I think he’s in a good spot to finish this season out.”