Big 12 QBs Duggan and Bowman back strong from health issues 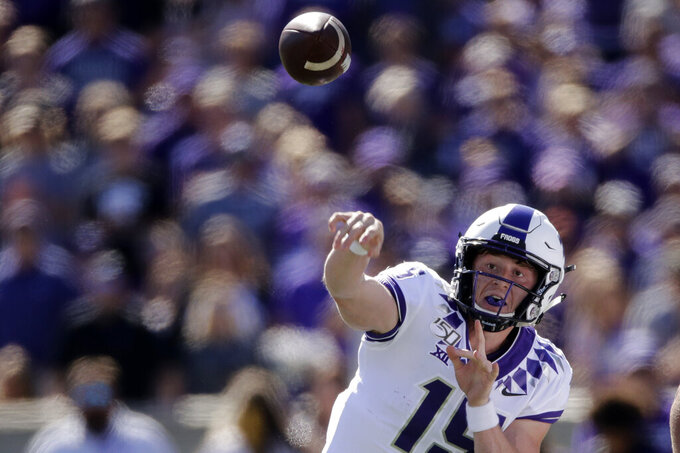 FILE - In this Oct. 19, 2019, file photo, TCU quarterback Max Duggan passes during the first half of an NCAA college football game against Kansas State in Manhattan, Kan. Duggan and Alan Bowman have come back throwing strong again in the Big 12 after both experienced different health issues. Duggan never had any symptoms or problems from a previously undetected lifelong heart issue that was not discovered until the TCU quarterback was going through enhanced COVID-19 protocols as part of preseason testing. (AP Photo/Charlie Riedel, File) 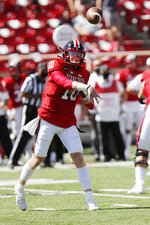 FORT WORTH, Texas (AP) — Max Duggan and Alan Bowman have come back throwing strong again in the Big 12 after both experienced different health issues.

Duggan never had any symptoms or problems from a previously undetected lifelong heart issue that wasn't discovered until the TCU quarterback was going through enhanced COVID-19 protocols as part of preseason testing.

“Never had any symptoms or thought of it," Duggan said this week. “Never knew about it until a couple months ago. Probably would have never found out about it.”

The issues were much more evident for Bowman, who has played only half of Texas Tech's games since making his debut as a true freshman when replacing an injured upperclassman in the first half of the 2018 opener. Bowman twice dealt with a partially collapsed lung that year, then broke his collarbone in the third game last season.

“Obviously, he has confidence with the more snaps he gets,” said Kansas State coach Chris Klieman, whose team faces Bowman on Saturday. "He’s a terrific leader, throws the ball really well, he’s really good at the pre-snap read knowing where he’s going with the football.”

Bowman, the national passing leader when he got hurt less than a month into last season, is back at the top of the Big 12 with 381 yards per game early in this virus-affected season. He leads the league by a wide margin with his 69 completions and 104 attempts. Second-leading passer Sam Ehlinger (344 yards per game) has attempted 73 passes in two games for No. 9 Texas.

Duggan, who started TCU's final 10 games as a true freshman last season, missed a significant amount of preseason practice after a procedure to address the unspecified heart ailment.

“It is solved,” he said, not elaborating on what what done.

He wouldn't have been ready to play if the Horned Frogs hadn't had their non-conference game against SMU called off because of a virus outbreak. He still didn't start the opener last Saturday against Iowa State, but completed 16 of 19 passes for 241 yards and three touchdowns in the second half of a 37-34 loss.

“He’s going to have to get himself in shape, the same reason why we didn’t start him last week," TCU coach Gary Patterson said. “You have a guy that only practiced a week and a half. ... By the time he gets done with this, only 2 ½ weeks.”

Duggan is expected to start Saturday at Texas, a year after throwing for 273 yards and two touchdowns, while running for 72 yards and another score in a win over the Longhorns.

Texas is coming off a 63-56 overtime win at Texas Tech, where senior quarterback Sam Elhinger and the Longhorns overcame a 15-point deficit in the final 3 minutes of regulation. Bowman threw for 331 yards and five TDs, but also had three interceptions.

Bowman is still classified as a sophomore, saving a year of eligibility when he didn't return for Texas Tech's final two games last season after recovering from the broken collarbone.

Kliff Kingsbury was still Texas Tech's coach when Bowman was pressed into action in the 2018 opener after an injury to starter Carter McLane. Bowman was 29-of-49 for 273 yards and a touchdown in his debut, made his first start a week later in a 77-0 win over an FCS team, then completed 43 of 59 passes for 605 yards and five TDs against Houston in Week 3.

Bowman threw for 2,638 yards and 17 touchdowns in eight games as a freshman. Before breaking his collarbone three games into coach Matt Wells' debut last season, Bowman had 1,020 yards passing, six TDs and 33.7 completions a game

When Duggan's heart issue was revealed in mid-August, it was unclear when, or even if, he would come back to play this season. He didn't miss a game, and didn't last year either as a true freshman after he injured the middle finger on his throwing hand.

“He wants to play, we're glad he wants to play,” Patterson said. “We found out last year how tough he was, how much of a competitor he was, and I think that as he goes forward it will help emulate into our offense and our football team.”