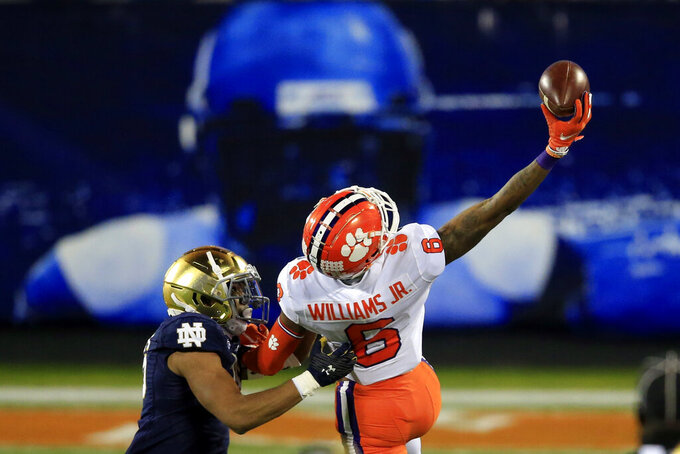 Clemson wide receiver E.J. Williams (6) hauls in a pass with one hand in front of Notre Dame cornerback Clarence Lewis (26) for a gain of 22-yards during the second half of the Atlantic Coast Conference championship NCAA college football game, Saturday, Dec. 19, 2020, in Charlotte, N.C. (AP Photo/Brian Blanco)

A season filled with uncertainty brought on by the pandemic will end with a perfectly predictable College Football Playoff.

Alabama vs. Notre Dame. Clemson vs. Ohio State. Four of the bluest of blue bloods and the teams that have comprised the top four in the rankings for nearly two months. Notre Dame was picked Sunday over Texas A&M for the final spot, ending what little drama there had been.

“It's been a unique season in so many ways,” Ohio State coach Ryan Day said.

Not not when it comes to the teams playing for the national championship.

The top four teams in the selection committee's first rankings of the season were the same teams at the end, just in different order. Alabama, Notre Dame, Clemson and Ohio State have also held the first four spots in the AP Top 25 since Oct. 25.

Only 11 schools have ever reached the playoff and all four of these participants have been there before.

The Fighting Irish and Crimson Tide will meet Jan. 1 at AT&T Stadium in Arlington, Texas, after a late pandemic-related relocation from the Rose Bowl in Pasadena, California. The Tigers and Buckeyes are set to play the same day at the Sugar Bowl in New Orleans if all goes according to plan.

The national champion is scheduled to be determined Jan. 11 in suburban Miami.

The Fighting Irish (10-1) are back in the playoff for the second time in three seasons, becoming the first team to lose a conference title game and make the final four. It was a novelty made possible only because of the pandemic, which pushed the famously independent Irish into a conference for the first time in school history.

The Atlantic Coast Conference is the second league to have two teams in the playoff, joining the SEC in 2017.

After sitting second in the CFP rankings for a month, Notre Dame was blown out 34-10 by Clemson in the ACC championship. That opened the door for No. 5 Texas A&M (8-1), but the Aggies were unable to become the third team in the playoff’s seven-year history to make the field without even winning its conference division.

“A great part of our discussion was related to those two resumes,” Barta said.

Notre Dame beat Clemson and North Carolina, which had been 15th in the previous playoff rankings. Texas A&M's only victory against a CFP team was Florida. The Aggies played Alabama in October and lost by 28 points.

The decision didn't go over well in Aggieland: Texas A&M quarterback Kellen Mond tweeted: “JOKE.” The Aggies can take out their frustrations on North Carolina in the Orange Bowl on Jan. 2.

Barta said the disparate number of games played by contenders — along with far fewer cross-conference games than usual —- was a challenge for the committee all season. But Ohio State's six-game schedule was not as important to the panel as the Buckeyes going undefeated and winning the Big Ten.

Oklahoma surged to sixth in the final rankings after closing with seven straight victories and a Big 12 title. The Sooners will face seventh-place Florida in the Cotton Bowl on Dec. 30.

Unbeaten Cincinnati finished eighth, making the Bearcats the top-ranked team among Group of Five conference champions and guaranteeing them a spot in one of the New Year's Six bowls. Cincinnati will meet Georgia in the Peach Bowl on New Year's Day.

Pac-12 champion Oregon will face Iowa State in the Fiesta Bowl on Jan. 2.

Notre Dame's reward will be a matchup with Alabama (11-0), the Southeastern Conference champion that is back in the playoff for the sixth time after missing out last year. The last time the Fighting Irish and Crimson Tide played was the 2012 BCS championship game and the Tide won 42-14.

Clemson (10-1) is in the CP for the sixth straight season, only missing out on the first playoff. Ohio State (6-0) is making its fourth appearance. The Tigers have won two playoff titles and the Buckeyes won the first after the 2014 season.

Clemson-Ohio State is a rematch of last season's dramatic semifinal in Arizona, won 29-23 by the Tigers. The two teams also met at the Fiesta Bowl in the 2016 playoff and Clemson beat the Buckeyes 31-0.

Instead of having more than three weeks to prepare for the playoff, the altered regular-season schedules mean the semifinals are 12 days away.

“It's very different to prepare,” Clemson coach Dabo Swinney said. “It's basically like an open date."

One of the semifinals was scheduled to be played at the Rose Bowl, but a move was announced Saturday night after coaches and school officials from playoff contenders complained about California's COVID-19 restrictions that ban spectators from sporting events and would have made it impossible for players' families to attend the game.

Playing the game at the home of the Dallas Cowboys will allow 16,000 fans to attend. Because of that, Barta said, the committee placed top-seeded Alabama there to give it the possibility of more of a home-field advantage.

The Superdome is currently set to have 3,000 fans for the Sugar Bowl, but that number could go up.

This season has been filled with disruptions as teams navigated COVID-19 outbreaks, contact tracing that sent players into extended quarantine and daily uncertainty about whether games will be played. More than 100 games were canceled or postponed since late August and more than a dozen teams have already said they have no plans to play in a bowl even if they are invited.

Ohio State had three regular-season games canceled and the Big Ten had to change a minimum games played rule earlier this month just so the unbeaten Buckeyes could play in the conference title game Saturday against Northwestern.

Still, 87% of the games scheduled were played.

College Football Playoff executive director Bill Hancock has said a team selected to a semifinal would not be replaced if it could not play on the scheduled date. The game would be postponed if necessary and a every effort would be made to make it up.