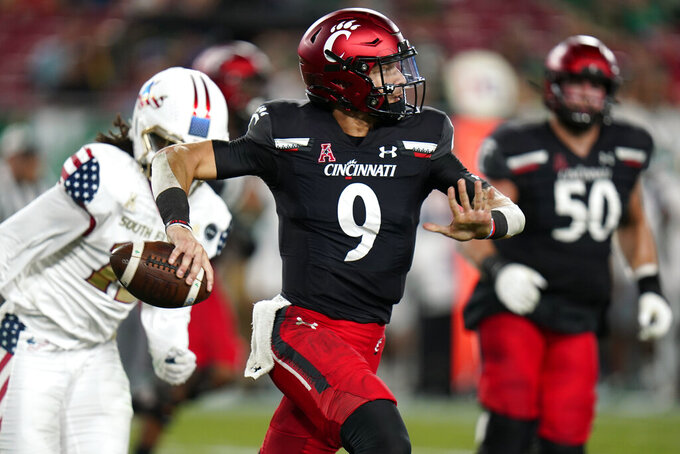 Cincinnati quarterback Desmond Ridder (9) looks to pass as he rolls out against South Florida during the first half of an NCAA college football game Friday, Nov. 12, 2021, in Tampa, Fla. (AP Photo/Chris O'Meara)

There was no movement in the selection committee's top seven after all those teams won last week. Michigan was still No. 6 and Michigan State seventh, heading into the Spartans' big game Saturday at Ohio State.

Notre Dame moved up a spot to eighth. Oklahoma State (9-1) is now the highest-ranked Big 12 team at ninth after Oklahoma was handed its first loss last week.

Wake Forest (9-1) is No. 10, the highest-ranked team from the Atlantic Coast Conference with three rankings left until selection Sunday.

In the seven-year history of the College Football Playoff, no team has come from farther back than ninth to reach the final four with two rankings remaining before selection Sunday. Michigan State did that in 2015, propelled by a victory at Ohio State.

Oklahoma was the one top-10 team to lose this past weekend and the Sooners fell to 13th.

Notable for Cincinnati, which is trying to become the first team from outside the Power Five conferences to make the playoff, was Houston moving into the rankings at 24th.

The Cougars have already clinched a spot in the American Athletic Conference championship game, where the Bearcats could be an opponent if they keep winning.

"When I talk about how firm (Cincinnati's) position is, this week it’s rock-solid at No. 5,” selection committee chairman and Iowa athletic director Gary Barta.

The Bearcats' only victory against a team ranked in the selection committee's top 25 is Notre Dame (9-1). They host SMU (8-2) on Saturday and then go to East Carolina (6-4) on the Friday after Thanksgiving.

— Barring a historic upset in one of its next two games, Georgia is going to enter the Southeastern Conference championship game —- most likely against Alabama —- playing for seeding.

— If Alabama wins out, including an SEC championship victory against Georgia, it's in.

— Ohio State and Oregon simply need to win out to get in. The Buckeyes have potentially the most difficult closing stretch in the country with Michigan State, Michigan and a Big Ten title game most likely against No. 15 Wisconsin or No. 17 Iowa.

Not only would three straight wins make the Buckeyes a lock, but it would also make Oregon almost impossible to overlook at 12-1 with a victory in Columbus against the Buckeyes. No matter how sketchy the Pac-12 competition has been.

Utah at No. 23 is the only other ranked Pac-12 team. The Utes host the Ducks on Saturday and those teams are positioned to meet again in the Pac-12 title game.

— If either Michigan or Michigan State wins out, beating the Buckeyes and taking a Big Ten title along the way, it's in.

— Can Alabama become the first team to reach the playoff with two losses?

There are two scenarios here: Alabama (9-1) loses a competitive game to Georgia in the SEC championship game. Or Alabama loses one of its two remaining regular-season games and beats Georgia in the SEC title game. Hard to imagine the Tide not getting in under the latter scenario. The former? Less likely, but never doubt the power Alabama has to sway the committee.

— Can Cincinnati be caught from behind even if it wins out?

The biggest threat to the Bearcats appears to be Oklahoma State (9-1), which could get to 12-1 with with a Big 12 championship and three victories against Oklahoma and Baylor.

There is also a scenario in which both Michigan and Michigan State win out, giving the Spartans a Big Ten title and easy entry to the playoff and leaving Michigan at 11-1, challenging the Bearcats.

Wake Forest winning the ACC at 12-1 would have a resume similar to unbeaten Cincinnati, but no one victory as impressive as a road win over Notre Dame.

Least likely to chase down an unbeaten Bearcats team is the Fighting Irish, who have gone on a nice run since losing to Cincinnati by 11 at home but with no really notable victories.