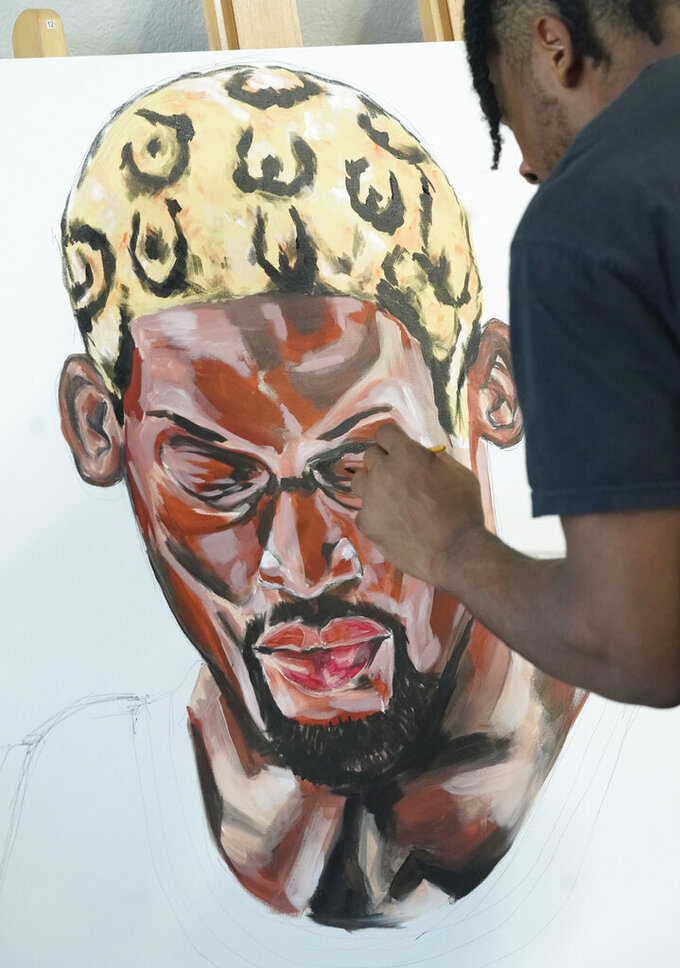 SMU defensive back RaSun Kazadi works on a painting at his apartment Wednesday, Aug. 11, 2021, in Dallas. The end of the NCAA ban on athletes being able to earn money for their fame and celebrity has led to some of them cashing in on their creative side. (AP Photo/LM Otero)

HUNTINGTON, W.Va. (AP) — Will Ulmer doesn’t have to hide anymore.

The Marshall offensive lineman, all 6-foot-4 and 300 pounds of him, unleashed a year's worth of energy in his first on-stage performance since the start of the pandemic, playing guitar and belting out songs in his Kentucky baritone for a modest crowd outside a Huntington ice cream store.

His keychain fastened to a belt loop and a can of smokeless tobacco bulging from a back pocket, Ulmer spent an hour singing country favorites along with one he wrote before finishing up with his spin on a West Virginia favorite, John Denver’s “Take Me Home, Country Roads.”

This time, he used his real name, too.

The NCAA's decision to allow athletes to be paid for their fame and celebrity has led to scores of deals big and small from coast to coast since July 1. Sponsorships and endorsements are the most common, but there has been another welcome wrinkle: Ulmer and other athletes are now able to show off their creative, artistic sides and earn some money while they're at it.

For Ulmer, it means being able to play his music at gigs without masking his identity under the pseudonym “Lucky Bill.” For Nebraska volleyball player Lexi Sun, it has meant helping design sports apparel. For SMU defensive back Ra-Sun Kazadi, it means he can sell his art.

“College athletes for the longest time haven’t really had a lot of opportunities to make money,” Ulmer said. “I think this is a great one for me. But it’s not really about the money.”

Like Ulmer, Kazadi sees his craft as an extension of himself. His works are a wide-ranging assortment that includes paintings of athletes, civil rights leaders, Egyptian Queen Nefertiti and the late rapper Tupac Shakur. Among his digital works is Emmy-winning actress and singer Zendaya.

A junior, Kazadi, who goes by Ra, has been painting only since high school. Some works are lighthearted and fun. Some were done as stress relief. Others reflect a certain point in his life. He also runs a separate non-profit group to promote social justice and community conflict resolution.

“My art, it is me,” Kazadi said. “Hopefully when people see it, they kind of see me. They kind of see what I’m thinking, how I’m feeling. So I feel like a lot of what I don’t say is communicated through my art.”

Before the NCAA change earlier this summer, Kazadi wasn't allow to connect his face to his work. A Texas law that debuted last month letting students to profit off their name, image or likeness “has made a huge change in my life,” in part through art sales off his website.

He's also showcasing his work at art shows, landed a sponsorship-mentorship deal with a custom art company, is working with real estate companies and interior designers, and there's been greater curiosity from high schools seeking to have him paint murals on their campuses.

The post-NIL interest has been so profound that Kazadi is mulling the possibility of hiring someone to help him out.

"It’s definitely helped me navigate the art world and helped me know that it’s actually a possibility," he said.

Sun wanted her deal with volleyball apparel company Ren Athletics to allow her personality and style to shine through in the launch of her clothing line — a black sweatshirt with her name and a golden outline of the sun's rays.

“They gave me like an open slate to create whatever I wanted and I was just super excited about that freedom and being able to take advantage of that,” Sun said.

It quickly sold out. Company spokeswoman Natalie Hagglund said the Sunny Crew shirt was the biggest promotion in the company’s nearly 10 years in business and that additional products with Sun’s name are under consideration.

Sun also struck an endorsement deal with Nebraska-based jeweler Borsheims. Sun, who is pursuing a master’s degree in advertising and public relations, said she has picked up some business skills.

“I would say that’s the biggest thing: Just with NIL in general, I think the experience of being able to have these interactions and business conversations of making a deal and what these meetings look like and all of those things,” she said.

Nebraska is among dozens of schools with formal NIL programs and many have arrangments with companies eager to hook up athletes with various brands. Some have put their business schools to work helping athletes take advantage of the new market. Indiana recently posted a NIL directory of all Hoosier athletes. At Duquesne, Jordon Rooney was hired as the first Division I personal brand coach.

Back at Marshall, Ulmer's teammate, defensive lineman Kyron Taylor, started Foreigner Clothing LLC last year. The line that includes T-shirts and sweatshirts features a scorpion, which both is Taylor's astrological sign and represents the “new life” his father was given when he moved to the United States from the Caribbean, he said.

Taylor's promotional work includes using other athletes on social media as brand ambassadors. Everything remains on a small scale, but Taylor is constantly jotting down new ideas. He estimates sales are about a dozen per week. Orders are shipped from his home, which is one positive aspect from living alone — no complaints from roommates about tripping over inventory.

“I live by myself so I can have storage for my brand,” he said.