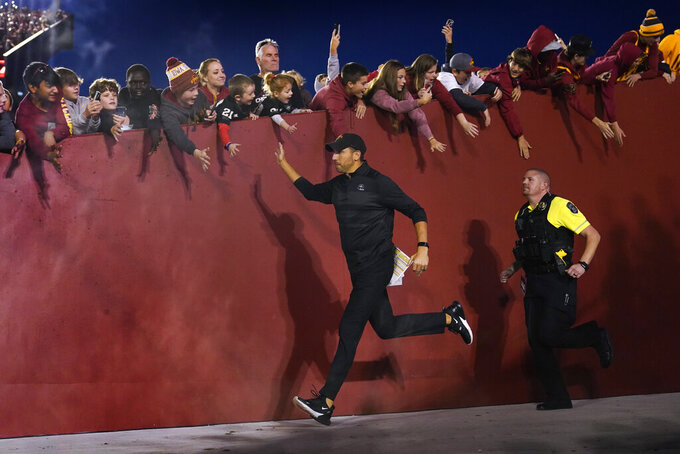 LUBBOCK, Texas (AP) — Iowa State's Matt Campbell is getting asked about other jobs in the Big 12, and interim coach Sonny Cumbie is finishing the season for Texas Tech with that opening now filled by somebody else.

It might be easy to forget the Cyclones still have a shot at a second consecutive trip to the conference title game in December in what has been a disappointing year for a preseason top 10 team.

With wins in the final three regular-season games — starting Saturday at Texas Tech — and some help, the Cyclones (6-3, 4-2 Big 12) would be headed back to Texas, probably to face No. 4 Oklahoma if they can beat the Sooners next week.

Iowa State, coming off a convincing victory over the Texas Longhorns, has to avoid the letdown that followed an uplifting victory over Oklahoma State, undefeated and ranked eighth at the time. West Virginia knocked off the Cyclones a week later.

“This team has earned the right to go play their best football in the month of November,” said Campbell, who was asked about his interest in the other Big 12 opening at TCU during the week. “So can you stay the course? I think a lot of that’s more mental than physical, but I think we’ll find out a lot about who we are and what we are by how we have the opportunity to manage these last 21 days.”

The Red Raiders (5-4, 2-4) have a different mental challenge. They're playing four days after Joey McGuire was introduced as the permanent replacement for Matt Wells, who was fired last month in the middle of his third season.

All the talk is about the future, not about a team that for almost a month has been one victory from bowl eligibility, which would be Texas Tech's first postseason bid since 2017.

“I want us to pour into these players as much as we can these last four weeks,” said Cumbie, who will stay through the bowl game if the Red Raiders go to one. “At the end of the day, we still have to win and we need to win. That’s what I’ve been trying to express to these guys, too. We’re doing all this to give ourselves the best chance to win a football game.”

Cumbie, a former Texas Tech quarterback who returned to his alma mater as offensive coordinator this year after seven seasons on the TCU staff, said he will have two choices at QB with Henry Colombi unavailable because of illness.

Donovan Smith, who replaced Colombi in the first half of a 52-21 loss to the Sooners two weeks ago, could get his first career start. Tyler Shough, the Oregon transfer who began the season as the starter, is close to returning from a broken collarbone and might get the nod.

Cumbie said Smith earned a chance to start with the way he played against OU, and would plan to tell him so if he does.

“It’s really similar to what I talked to him about midway through the Oklahoma game,” Cumbie said. “You’ve had really good practices all season long in every role that we’ve given you. Just continue to do that.”

Since become the featured back five games into his freshman season, Iowa State's Breece Hall has rushed for at least 100 yards 19 times in 29 games. The junior has done it in both meetings with Texas Tech, averaging 159 yards while scoring twice in each game. Hall has at least one rushing TD in 21 consecutive games, a school and Big 12 record and tied for the third-longest streak in FBS history.

Texas Tech receiver Erik Ezukanma had eight catches, a career high, for 123 yards and a touchdown against the Sooners. Ezukanma is second in the Big 12 in yards per game at 78.9 and leads the team with 631 yards receiving. The junior is on pace to become the first to lead Texas Tech in receiving yards three consecutive seasons since Wayne Walker from 1985-87.

Brock Purdy, already Iowa State's winningest QB, is going for his 30th career victory. If he gets it, the Cyclones will be guaranteed a fifth consecutive winning record in Big 12 play. Before the current streak, Iowa State had one winning conference record in 21 Big 12 seasons (1996-2016).