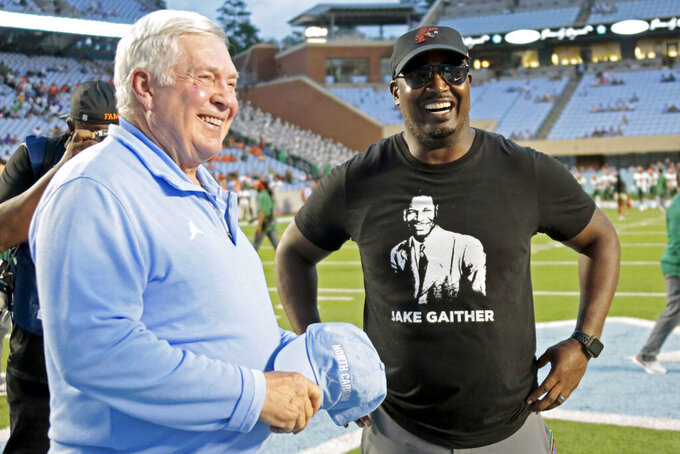 TALLAHASSEE, Fla. (AP) — Florida A&M’s football team, which considered not traveling for its season opener at North Carolina last week, is openly questioning the level of financial and compliance support players are receiving from the university.

Nearly 90 players penned a blistering letter to school president Larry Robinson on Sunday, a day after the team lost 56-24 to the Tar Hills while playing without 26 ineligible players. FAMU was paid $450,000 to make the trip to Chapel Hill.

The letter implored Robinson for “changes made now” and says “we are not interested in further empty dialogue with you or your staff.” The letter says players knelt in protest during two school songs played after the game and will continue to do so “until significant changes that facilitate a positive student-athlete experience are made.”

FAMU plays Jackson State in the Orange Blossom Classic in Miami on Sunday, a game nationally televised on ESPN2.

The letter clarifies players were ruled ineligible not for academic performance but rather because of “procedural issues within the registrar’s office, compliance department and academic advisement.” FAMU has one compliance and one academic adviser for athletics, according to the university.

Among the issues spelled out in the letter involve financial aid was not awarded in a timely manner to buy books, register for classes and avoid evictions.

The university responded by saying it is committed to maintaining a culture of compliance and conforming with NCAA guidelines.

“We are confident that our processes are effective and timely,” the school said Tuesday. “We will continue to monitor our efforts in this regard and pursue all avenues to provide an excellent student experience to every athlete. FAMU is committed to upholding high standards and rigorous adherence to NCAA guidelines.”

Among the players ruled ineligible were linebacker Isaiah Land, the top defender in the Football Championship Subdivision last season and a potential NFL draft prospect in 2023, and right tackle Cam Covin. Land and Covin have retained attorney Tom Mars, who has a history of helping college players through NCAA eligibility issues.

“I don't think anyone in college sports has ever witnessed a bigger blunder on the part of the university or a more unfair punishment aimed at the players — the only people in this mess who did everything right,” Mars said in a statement posted on Twitter.

“If a parent fails to file a tax return, the IRS doesn't punish their kids. But this is the college sports equivalent of doing just that.”