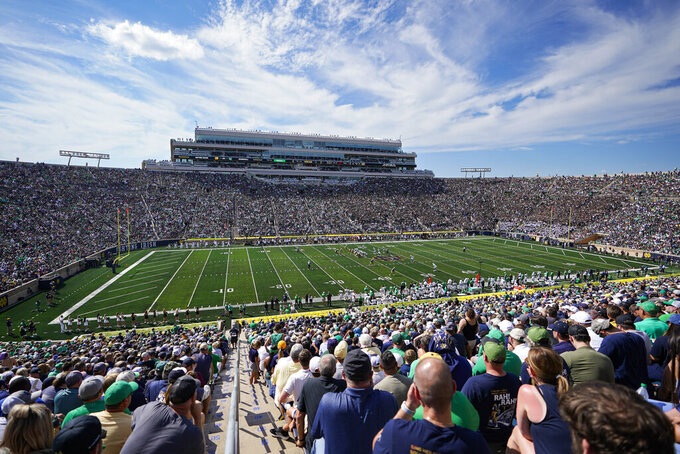 FILE -Notre Dame and Marshall play during the first half of an NCAA college football game in South Bend, Ind., Sept. 10, 2022. The athletic directors who lead the schools that play Division I college football at the highest level want the sport to continue be governed by the NCAA — if that governance can be streamlined. LEAD1, an association of Football Bowl Subdivision ADs, convened 105 of its 131 members Wednesday, Sept. 14, for a meeting that focused mostly on how best to govern major college football. (AP Photo/Michael Conroy, File)

WASHINGTON (AP) — The athletic directors who lead the schools that play Division I college football at the highest level want the sport to continue be governed by the NCAA — if that governance can be streamlined.

LEAD1, an association of Football Bowl Subdivision ADs, convened 105 of its 131 members Wednesday for a meeting that focused mostly on how best to govern major college football.

There has been some momentum in the past year to seriously explore breaking FBS away from the NCAA and creating another structure to run the biggest revenue generator in college sports.

For now, though, the preference is for reform within the current structure.

“At the end of the day, it was very clear that the status quo is not acceptable,” said LEAD1 President and CEO Tom McMillen, the former Maryland basketball star and congressman. “And that there was a strong, very strong, preference for a model in the NCAA that is extremely streamlined and much less bureaucratic."

McMillen added: “And if that can’t be accomplished, move it to the outside.”

McMillen did not detail what a more efficient governing model for major college football would entail.

He said LEAD1 planned to gather ideas cultivated at Wednesday's meeting and share them with NCAA officials in a letter.

"We're a facilitator. We’re not the decision-maker," McMillen said. “We recommend. That’s really the extent of what we can do.”

The NCAA is in the midst of what college sports leaders hope will be an overhaul of the way Division I is structured and governed.

The Division I Transformation Committee was formed last year and has been meeting regularly for months. It is led by Southeastern Conference Commissioner Greg Sankey and Ohio athletic director Julie Cromer, who is also a member of LEAD1.

“Certainly the debate today has been helpful,” Cromer said. “I think we’ll use this feedback in our transformation committee work.”

The Transformation Committee has already handed down proposals related to transfer rules and how NCAA enforcement operates as part of phase one of its work. A set of those proposals were approved last month.

Phase two is in progress, with membership requirements for schools, student-athlete benefits, access to championship events and revenue distribution at the core of the discussions.

“I think there exists some frustration with the lack of responsibility and the ability to be nimble and specific to our needs in football, within the current decision-making structure,” Cromer said of the FBS ADs.

As the NCAA's role in governance is deemphasized, and more power is handed down to conferences and schools, it seemed a perfect time for a re-assessment of how major college football operates to many athletic directors.

The NCAA has limited involvement over FBS compared to the rest of Division I sports. The conferences run the College Football Playoff and share the hundreds of millions of dollars of revenue it generates with no NCAA involvement.

“Nothing about its current constitution would support that,” Notre Dame athletic director Jack Swarbick told The Associated Press last month. “So you can change it to play that role. But it’s not set up to do it now.”

One of the concerns about moving away from the NCAA would be the need to create a new, similar organization.

McMillen said the NCAA spends about $65 million per year on administrative and insurance costs.

“That does not include any kind of extraordinary costs or legal," McMillen said. ”As you know, the NCAA is the legal shield. They take a lot of the front load."

The Knight Commission on Intercollegiate Athletics, an independent group of former and current college administrators that advocates for an emphasis on education in college sports, proposed in 2020 separating FBS from the rest of NCAA sports.

Sankey has said he is adamantly against the Knight Commission's proposal, in large part because he doesn't like the idea of compartmentalizing one sport within an athletic department.

Sankey attended the LEAD1 meeting to give the ADs an update on the Transformation Committee's work.

He said he also shared with the ADs his skepticism for the effectiveness of an FBS breakaway from the NCAA. He said he understands the desire for change.

“And given the distinctions around football, there are those who view that as a relevant point of change,” Sankey said. “But then the why, the outcomes, those have to be much further developed.”