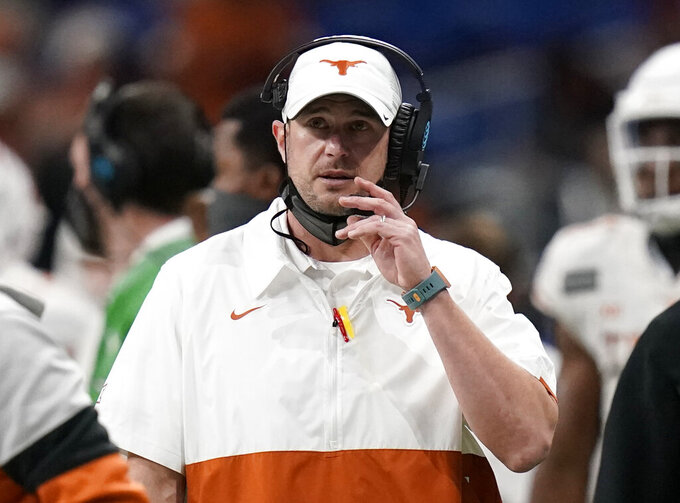 FILE - Then-Texas head coach Tom Herman looks on during the second half of the Alamo Bowl NCAA college football game against Colorado in San Antonio, Dec. 29, 2020. Tom Herman will take over as head coach of Florida Atlantic's football team as it heads into its first season in the American Athletic Conference, the school announced Thursday, Dec. 1, 2022. (AP Photo/Eric Gay, File)

BOCA RATON, Fla. (AP) — Former Texas and Houston head coach Tom Herman will take over at Florida Atlantic as it heads into its first season in the American Athletic Conference.

The hire comes just days after FAU fired Willie Taggart, who went 15-18 in his three seasons with the Owls. Details of the contract with Herman were not immediately available.

“We are incredibly excited to welcome Tom Herman to Paradise,” FAU Director of Athletics Brian White said Thursday. “Throughout the process and the more we talked with Coach Herman, the more it became apparent to me that he was the right person to lead our football program. Beyond his knowledge of the game, which is obvious by his success over the years, he also truly cares about the young people in his program.”

FAU's final season in Conference USA ended with a 5-7 record and an overtime loss to Western Kentucky. The Owls will be in the American next season.

Herman returns to college football after spending the 2021 season with the Chicago Bears as an offensive analyst.

Herman was 22-4 at Houston, a mark that helped him land the head coaching job at Texas where he went 32-18 with four straight bowl trips in 2017-2020. He also was an offensive coordinator and quarterbacks coach at Ohio State during the Buckeyes' 2014 national championship season, as well as stops at Iowa State, Rice and Texas State.

“All the pieces are in place at FAU for us to be successful,” Herman said. "There are already great young men on this team, great facilities, a great location, a great recruiting base and great leadership, all of which are important to building a successful program.”