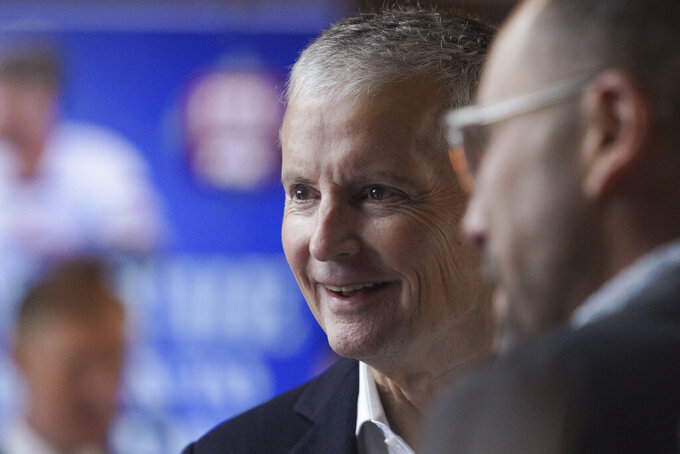 FILE - David Neal, executive producer of Fox's FIFA World Cup soccer coverage from Qatar, mingles during a preview event Thursday, Oct. 13, 2022, in New York. Fox Sports executive producer David Neal first heard in 2015 that the World Cup was moving to near the holiday season and he thought it would be the biggest lump of coal for the network and soccer supporters. But Neal and others have discovered that the world’s biggest soccer tournament could be the ultimate gift for Fox, Telemundo and sports fans. (AP Photo/Bebeto Matthews, File)

When Fox Sports’ David Neal first heard in 2015 that FIFA was moving the World Cup to near the holiday season, he thought it would be the biggest lump of coal for Fox and soccer supporters.

However, Neal and others have discovered that the world’s biggest soccer tournament moving from summer to late fall because of Qatar’s desert heat could be the ultimate gift for Fox, Telemundo and sports fans.

Yes, the World Cup will compete with the NFL, college football and other events during a traditionally jam-packed time on the sports calendar. But, it has been football since Labor Day weekend that has helped promote fútbol’s biggest quadrennial event, which begins on Sunday.

“The pluses greatly outweigh the minuses,” said Neal, Fox’s executive producer for the World Cup. “It starts with cross-promotion. Being able to benefit from being promoted on our football platforms, you can’t attach a number to how valuable that is in raising awareness.”

Fox Sports holds the English-language rights, while Telemundo is the Spanish-language broadcaster.

The Spanish-language numbers are just as important when measuring soccer audiences in the United States. During the 2018 World Cup in Russia, the overall average for the tournament was 4.7 million viewers, with 1.9 million — or 40.4% — tuning in on Telemundo.

The numbers could be even closer this year. Last May’s Champions League final between Liverpool and Real Madrid was viewed by a record 5.36 million fans, with 48.5% watching it on Univision.

Mark Marshall, president of advertising sales and partnerships at NBCUniversal, noted that the Hispanic customer represents almost 20% of the U.S. population and $2.8 trillion of an estimated U.S. Hispanic GDP.

“The World Cup is the ultimate place for brands to reach and engage this audience in the U.S.,” Marshall said. “Almost three-quarters of Latinos 16 and older say they’re soccer fans, and over half say they’ve reshuffled their priorities to watch an important soccer match. There are no bigger soccer matches than the World Cup.”

Having the United States qualify after missing in 2018 should also help ratings improve and be closer to the 2014 World Cup in Brazil, which averaged 8.1 million viewers on ESPN and Univision.

Fox began its World Cup marketing during the MLB All-Star game but ramped it up during NFL and college football games.

The spots, featuring John Hamm as Santa with appearances by Tom Brady and Mariah Carey, were a constant presence during football games, the baseball postseason and Fox’s prime-time programming.

“Statistically, viewership levels are always higher in the fall and winter. There are just more people available to watch television,” Neal said. “We’re not having to compete with getting people in off the beach or the golf course. Viewers are already accustomed to watching a lot of television this time of the year.”

Fox also isn’t just sticking to its programming to promote the World Cup. With the United States facing England on Black Friday, Fox Sports will have a balloon of a U.S. soccer player doing a bicycle kick in the Macy’s Thanksgiving Parade on Nov. 24.

“This type of synergy, connection and cross-promotion, we haven’t been able to do that in a summer type of World Cup,” Lalas said. “It’s not a situation of making lemonade out of lemons. It’s just looking at the situation and thinking of it differently.”

All three United States matches in Group B will air on Fox at 2 p.m. EST.

FS1 will carry the other 30 matches, with all but two being group games, beginning with the Nov. 20 opening match between Qatar and Ecuador, which has an 11 a.m. EST kickoff. Most of FS1’s weekday coverage in the first week will be in the 5 a.m. and 8 a.m. EST windows.

There are likely to be some games where Telemundo outdraws Fox or FS1. One of the best examples will be on Nov. 26 when the Group C match between Argentina and Mexico — a 2 p.m. EST kickoff — will be on FS1 because of the Ohio State-Michigan college football game occurring simultaneously on Fox.

Fox will have a dilemma if the United States finishes first in Group B. The round of 16 match between the Group B winner and second-place team in Group A is Dec. 4 at 2 p.m. EST, where it will be going up against a full slate of NFL games. FS1 has both round of 16 games that day.

For those wondering if the weekend matches might be affected by college football, Premier League broadcasts on NBC are averaging 919,000 viewers, an increase of 7% over last season.

The most significant area where Telemundo could take a larger audience share is streaming. All matches will be on Telemundo’s streaming service and Peacock, which has 15 million paid subscribers and 30 million monthly active accounts.

Fox’s matches will be available on its app and the streaming service Tubi, which has a smaller reach than Peacock. According to a study from Tremor International, a video-first ad tech platform, 38% of fans between the ages of 25-34 prefer to watch games on streaming compared to 33% on broadcast or cable television.

“I think we have a competitive advantage in Peacock,” said Romina Rosado, the EVP for Hispanic streaming at NBCUniversal Telemundo Enterprises. “It’s our job to make content available to consumers wherever and on whatever platforms, and that means this World Cup in particular. Peacock has a ton of scale and audiences in both English and Spanish language users.

“And as (Telemundo Deportes president) Ray (Warren) said, and I believe we have some research about this, too, soccer is better in Spanish. We expect a lot of soccer fans will watch on Peacock because they’re just more fun.”

According to Kantar Media, Fox and Telemundo brought in a combined $384.33 million advertising revenue during the 2018 World Cup. With the United States making it this time after not qualifying in 2018, both networks have little inventory remaining to sell and have said they have already exceeded totals from the last tournament.

Most of those companies are back again and will likely air ads on both networks. Ford, T-Mobile, and Coca-Cola have been named as presenting sponsors for Telemundo’s coverage.

“Ads in the World Cup reach a very different audience with more varied narratives and tones — advertisers view the World Cup more like the Olympics than American pro sports,” said Kevin Krim, the CEO of EDO, an advertising analytics platform. “We expect World Cup ads will be geared toward a younger, more global audience and focus on unifying fans. Additionally, World Cup ad commitments were almost entirely done upfront, so there will be little to no impact on ad sales resulting from recession concerns.”

Even before Fox and Telemundo had started planning for Qatar, they had already gained one advantage from a fall World Cup. In 2015, FIFA agreed to sell the rights to the 2026 World Cup to Fox and Telemundo to avoid a possible lawsuit by Fox for shifting this year’s tournament from summer to late fall.

The 2026 World Cup was awarded to the United States, Canada and Mexico in June 2018.