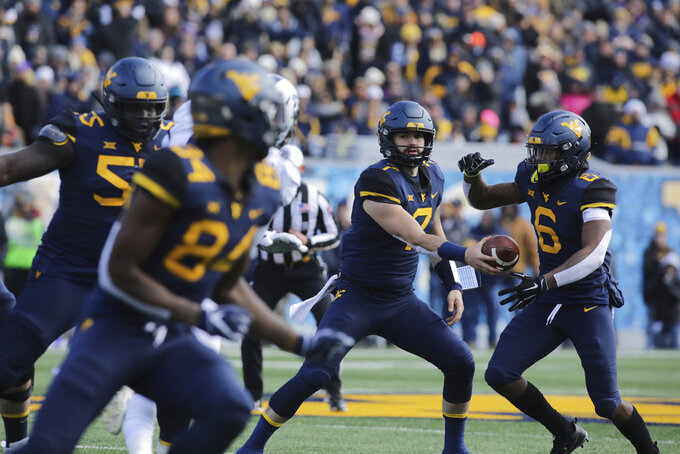 West Virginia quarterback Will Grier (7) hands the ball off to running back Kennedy McKoy (6) during the first half of an NCAA college football game against TCU, Saturday, Nov. 10, 2018, in Morgantown, W.Va. (AP Photo/Raymond Thompson)

MORGANTOWN, W.Va. (AP) — Once No. 7 West Virginia's offense found a rhythm, the Mountaineers imposed their will on TCU.

West Virginia scored three touchdowns in a 3:25 span late in the second quarter to break open a tie game and propel the Mountaineers to a 47-10 victory over the Horned Frogs on Saturday.

Will Grier had touchdown throws of 32, 8 and 4 yards, the eighth time this season he's had at least three. Grier finished 25 of 39 for 343 yards on a breezy day.

"I have a lot of respect for (TCU coach) Gary Patterson and that team. Controlling the tempo is huge," Grier said, adding that offensive coordinator Jake Spavital "did a great job of mixing it up and just us being on the same page."

West Virginia (8-1, 6-1 Big 12, No. 9 CFP) piled up 535 yards of offense against the injury-riddled Horned Frogs (4-6, 2-5) as it pursues a possible berth in the conference championship game with two regular-season games left.

"Morale's good. Confidence is good. Work ethic is good. It's why we're winning," West Virginia coach Dana Holgorsen said. "You're only as good as your next one, so these guys have to continue doing that."

"When we get going, we're dangerous," West Virginia tight end Travon Wesco said. "We've got to come out like that and know that we have to have that mentality every time we touch the ball."

TCU (4-6, 2-5) was held to a season-low 222 yards of offense, the third time in four games it's gained fewer than 300. The Horned Frogs are in jeopardy of missing a bowl for just the third time under Patterson.

It also marked the fewest yards allowed this season by West Virginia, who allowed 520 yards in a win at Texas a week ago.

TCU's Mike Collins had some success throwing to sophomore Jalen Reagor, but not much else worked. Collins completed 22 of 37 passes for 229 yards. Reagor had a career-high 11 receptions for 150 yards. His 28-yard scoring catch gave him a TD in five straight games.

Collins also was flagged for intentional grounding in the end zone in the third quarter and West Virginia was awarded a safety.

"We're not good enough right now to make up for mistakes," Patterson said.

Grier followed that by finding Marcus Simms with a 53-yard pass to set up Kennedy McKoy's 1-yard scoring run for a 33-3 lead.

TCU: The Horned Frogs must win their final two games to become bowl eligible. Not impossible, but TCU must find the resolve to finish out a challenging season.

West Virginia: Grier didn't get a ton of opportunities to throw downfield, relying on a diet of short- to medium-length passes and completed 10 of them to his tight ends and running backs. Wesco finished with five catches for a team-high 86 yards, including a 32-yard score.

Holgorsen moved into second place in school history with 61 wins, one ahead of Rich Rodriguez. Hall of Famer Don Nehlen holds the mark with 149 wins.

The effort will be good enough to move West Virginia up in the AP Top 25 if a higher-ranked team loses.

West Virginia improved to 5-0 at home with the Nov. 23 regular-season finale remaining against Oklahoma. The last time the Mountaineers went unbeaten at home in a season was in 2009.

TCU plays at Baylor next Saturday.