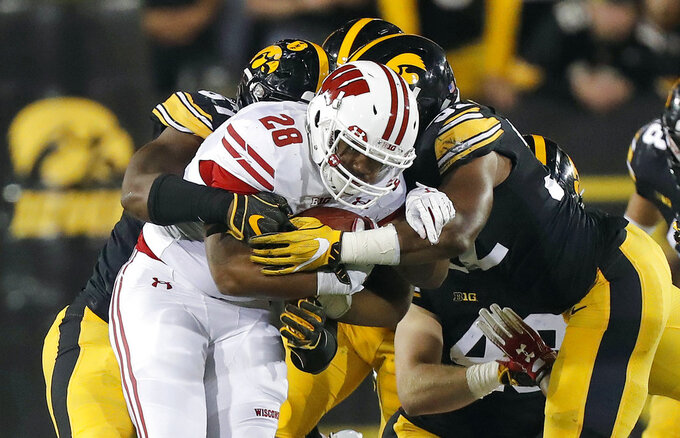 FILE - In this Sept. 22, 2018, file photo, Wisconsin running back Taiwan Deal, center, is brought down by a host of Iowa defenders during the second half of an NCAA college football game in Iowa City. The Hawkeyes (4-1, 1-1 Big Ten) pose their own unique challenges as they try to get back into the West Division race after losing their conference opener to No. 15 Wisconsin. Their defense has allowed the third-fewest points in the conference (16.6 per game) and the second-fewest yards (270.4). (AP Photo/Matthew Putney, File)

After returning from a road trip on which they faced a potent offense and an improved defense led by a second-year coach who expects to climb the Big Ten ladder, Ferentz's Hawkeyes face virtually the same scenario this weekend at Indiana.

"They're similar in some ways to what we just saw (at Minnesota)," Ferentz said. "But the big difference in my mind is the (Indiana) quarterback is a very versatile guy. He's a really good thrower. They've got a good attack. Their offensive coordinator is a veteran coach who really is highly regarded by I think everybody in football, and they put pressure on you a lot of different ways."

Of course, the Hawkeyes (4-1, 1-1 Big Ten) pose their own challenges as they try to get back into the West Division mix after losing their conference opener to No. 15 Wisconsin. Winning last week's shootout 48-31 certainly helped.

Now they head to Bloomington with one of the nation's stingiest defenses. Iowa yields just 16.6 points per game, No. 3 in the Big Ten; 272.4 total yards per game, the second-lowest total in the conference; and 2.7 yards per carry, No. 6 in the Bowl Subdivision.

It all looks quite familiar to Indiana coach Tom Allen.

"Very big, physical, everything you'd expect from an Iowa football team," Allen said. "Great defense, especially in the box. Gives us long, big, strong, and they really are very stingy, don't give up a lot of plays."

Indiana's surprising defense has been better this season. Last week, the Hoosiers (4-2, 1-2) managed to slow down Ohio State's vaunted ground game by limiting the Buckeyes to just 3.2 yards per carry.

If they can hold up against Hawkeyes quarterback Nate Stanley, who is completing nearly 62 percent of his passes with nine touchdown passes and four interceptions, it certainly would help the Hoosiers avoid back-to-back losses for the first time since last season.

But with quarterback Peyton Ramsey, running back Stevie Scott and a cadre of talented receivers leading the Hoosiers, Iowa has another potential problem: Injuries.

Middle linebacker Jack Hockaday (knee), the Hawkeyes' top tackler, is expected to sit out this weekend and his backup, Amani Jones, will miss the first half after being ejected for targeting against the Golden Gophers. Outside linebacker Nick Niemann (strained knee) also is expected to miss his second straight game.

The status of tight end Noah Fant and running back Ivory Kelly-Martin also remain in doubt after both were hurt at Minnesota.

For Ferentz, it's just another complication in a week his team must again be ready for anything and everything.

"I think the big wild card here is the quarterback. He can pull it down and run. Some of it's designed. Other things, if it opens up, he'll just take off," Ferentz said. "Those are the things that keep drives going and really tend to be tough."

Ferentz is in his 20th season in Iowa City and presumably needs one more win to get back in the Top 25 after coming in 26th last week. All the Hawkeyes may need to make the jump is score 20 points. Since the start of last season, Iowa is a perfect 10-0 when it scores at least 20 points and is one of two defenses to have allowed just two rushing scores this season. The other team is Southern Mississippi.

Indiana has turned things around when it comes to takeaways. The Hoosiers are tied for No. 7 nationally with 13 through the first six games, matching their 12-game total from last year. Indiana also ranks among the national leaders in fumble recoveries (six, tied for No. 13) and interceptions (seven, tied for No. 20). It's not by accident.

"I do think this fall camp I got back to really attacking the ball in practice," Allen said.

While injuries may leave Iowa's defense short-handed, defensive end Matt Nelson should get plenty of attention from the Hoosiers this week. Nelson matched his career high with three sacks — all in the first half — last week and was rewarded by being named the Big Ten's defensive player of the week. He finished with four solo tackles in the game and now leads the league with five sacks this season. Iowa's other defensive end, A.J. Epenesa, was named the league's co-defensive player of the week following the Hawkeyes victory over rival Iowa State earlier this season.