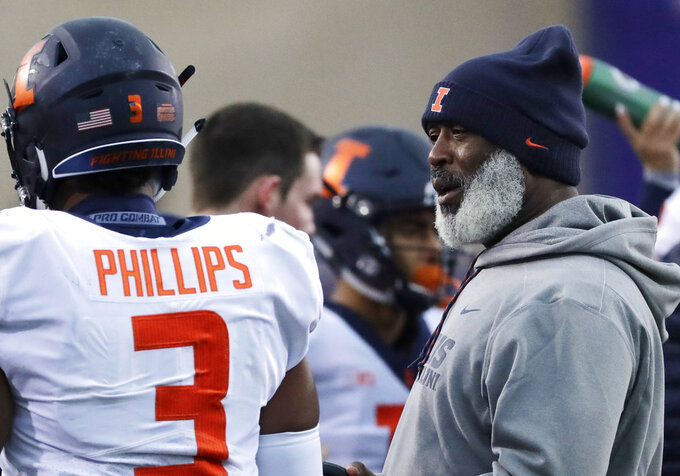 CHAMPAIGN, Ill. (AP) — Illinois extended the contract of coach Lovie Smith for two years through 2023 after the Illini finished his third season with four victories.

Athletic director Josh Whitman said Sunday the extension demonstrates his belief in Smith, his staff and the plan they have going forward. Whitman hired Smith, the former NFL head coach who led the Bears to the Super Bowl, soon after he was named AD in 2016.

"I have studied our program extensively, and I see steady progress, both in the development of our current players and the talent we are adding to our roster," Whitman said. "To date, we have remained one of the youngest teams in college football, with only nine seniors and nearly 80 freshmen and sophomores. As our players grow in strength, skill, and experience, more wins will follow."

Smith's original deal was for six years and $21 million. Terms of the extension were being finalized.

"Those of us around the program see the progress being made each and every day, and we expect to be competing for championships very soon," Smith said. "Our incredible fans and everyone on our campus deserve nothing less."

Whitman said the school is committed to building a program that has had one winning season since the 2007 team went to the Rose Bowl. A $15 million football building will open next year and will feature expanded strength and conditioning and sports medicine spaces, coaches' offices, meeting rooms, locker rooms and other areas for recruiting and prospect hosting.

"We recognize that our work is far from finished, with improvement needed in every phase of our program's development," Whitman said. "As I have said on many occasions, stability and continuity are key to building a foundation that will yield long-term success. With the opening of our new facility next summer, and the continued efforts of our staff and student-athletes, the success we all covet is within reach."