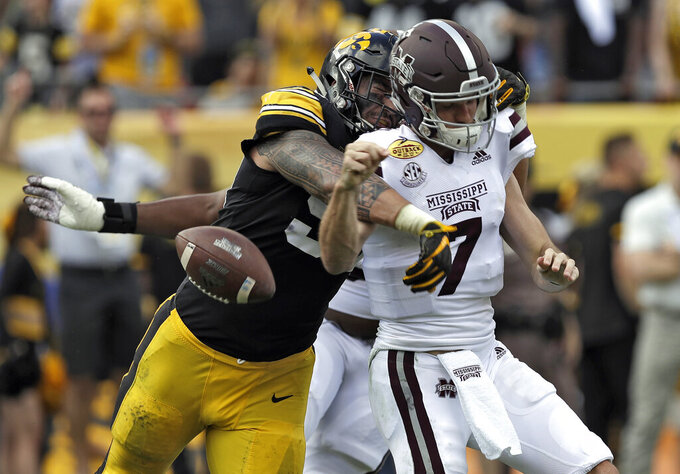 FILE - In this Jan. 1, 2019, file photo, Iowa defensive end A.J. Epenesa (94) strips the ball from Mississippi State quarterback Nick Fitzgerald (7) causing a fumble during the first half of the Outback Bowl NCAA college football game, in Tampa, Fla. Iowa junior A.J. Epenesa knows that he has a strong shot at being picked in the first round of the 2020 NFL Draft should he choose to go pro next spring. He’s just choosing not to think about it until then. Epenesa, a 6-foot-6, 280-pound defensive end who led the Big Ten with 10.5 sacks a year ago despite coming off the bench, is poised for a monster season in 2019. (AP Photo/Chris O'Meara, File)

IOWA CITY, Iowa (AP) — Iowa junior A.J. Epenesa knows that he has a strong shot at being picked in the first round of the 2020 NFL draft should he choose to go pro next spring.

He's choosing not to think about it all that much.

Epenesa will play nearly every down next fall after the Hawkeyes lost three linemen to the NFL, meaning his numbers should spike even as opposing teams build their game plans around slowing him down. But Epenesa also knows that if he loses sight of doing all he can to help the Hawkeyes in 2019, he might not be as highly regarded by NFL teams in 2020.

Iowa opens next season on Aug. 31 against Miami (Ohio).

"It's a lifelong dream," Epenesa said about playing in the NFL. "But I try not to think too hard about it. I don't want it to distract me from other things. Obviously, it's a blessing to be put up that high with other big names ... basically, I don't want to lose focus on what's going on here."

As arguably the highest-rated recruit coach Kirk Ferentz has had in 21 seasons at Iowa, Epenesa arrived in Iowa City with a ton of hype. The Hawkeyes even used him as a freshman, something they rarely do with linemen, and he made the Big Ten's all-freshman team in spot duty.

Epenesa made major strides as a sophomore and ranked 12th nationally in sacks, 16th with four forced fumbles and fourth in the Big Ten with 16 1-2 tackles for loss. He couldn't crack the starting lineup, though, because veterans Parker Hesse, Matt Nelson and Anthony Nelson helped form one of the nation's best starting four.

Rather than seeking more playing time by entering the transfer portal, Epenesa treated that trio as mentors while making the most of his opportunities on passing downs.

Although Epenesa's size, speed and athleticism are the main reasons NFL teams are salivating over his potential, his team-first attitude should only boost his stock that much higher.

"I knew my time would come. I knew my moment would be here," Epenesa said. "The way (the veterans) accepted me and brought me in was something unique. I think that maybe at other places might be a little more skeptical about, 'Oh, I don't know about this kid, this freshman coming here.' They didn't see a freshman. They didn't see a five-star recruit that people were trying to hype up. I came in with the mindset of being a sponge and just learning, and they accepted me for that."

Epenesa won't deny he's let his mind wander toward next spring's draft in Las Vegas. He wants to be motivated by his goal of playing in the NFL being at his fingertips — but only if he keeps improving.

"I mean, ever since you're a kid you think about stuff like that, playing at the highest level and potentially being picked in the highest round for that highest level. It's like a dream come true," Epenesa said.