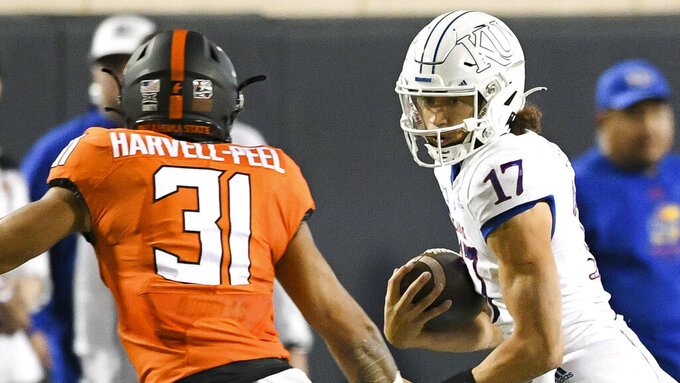 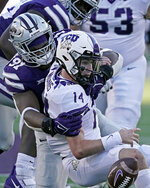 LAWRENCE, Kan. (AP) — The last two coaches to face Kansas State have been let go almost immediately after they lost.

In reality, Leipold is in his first year of arguably the biggest rebuild in college football, so his job with the Jayhawks is pretty safe regardless of what happens when they face the Wildcats in the Sunflower Showdown on Saturday.

But getting a win? Well, that would endear Leipold to a weary fanbase more than any of the four coaches before him.

“Hopefully there's a lot of things that go into extra motivation and energy and enthusiasm about the opportunity,” Leipold said, “but as we continue to build our program, we want to make sure that we're staying focused on the things that we need to, and that's our daily preparation. There's a lot that can be gained for a program like ours as we work to build this by playing well on Saturday.”

While it hardly carries the luster of the Iron Bowl or other big-time rivalries, the Kansas State-Kansas game is one of the longest running in college football. It started in 1902 and will be played for the 119th time on Saturday.

And given the state has only the two Division I football programs, and the only pro team — the Kansas City Chiefs — is just over the state line in Missouri, the game carries a lot of heft for those that call Kansas home.

“One of my favorite games at Kansas State was in 2019 when we played there. It's a fun atmosphere, especially when the majority of the crowd was purple,” said Wildcats quarterback Skylar Thompson, who grew up in suburban Kansas City.

“This is the biggest thing for all of us that are not from the state of Kansas, even though I pretty much am,” he said, “and we all kind of put ourselves in the shoes of the people from the state and how much this game means to them.”

It's not just bragging rights, though. The Jayhawks (1-7, 0-5 Big 12) can earn the kind of statement win they haven't had since Mark Mangino was roaming the sidelines, while the Wildcats (5-3, 2-3) can become bowl-eligible with a victory.

They've knocked off Texas Tech (which fired Matt Wells) and TCU (which parted ways with Gary Patterson) the past two weeks.

Kansas leads the series 64-49-5, including a disputed forfeit of the 1980 game, but the past three decades have largely belonged to the Wildcats. They've only lost four times since 1993 while winning the last 12 meetings.

The Wildcats should have running back Joe Ervin back after missing last week's win over TCU. Wide receiver Malik Knowles and Phillip Brooks, both of whom got banged up in the game, missed practice this week but hope to play Saturday.

Kansas cornerback Jeremy Webb, who missed last week's lost to Oklahoma State, also could be available despite missing practice early in the week. Less likely is the return of freshman cornerback Jacobee Bryant from his injury.

Jayhawks quarterback Jason Bean has had a wildly different past two weeks. He was 17 of 23 for 246 yards with a TD pass and no interceptions in nearly engineering an upset of then-No. 3 Oklahoma, then was just 3 of 10 for 10 yards with no TDs and two picks before getting benched in a 55-3 blowout loss to the Cowboys.

"“Getting (Jason) off to a good start is important for him,” Leipold said.

Kansas State defensive end Felix Anudike-Uzomah tied the school record with four sacks while forcing two fumbles last week against TCU, putting him among the leaders nationally in sacks. But for a while it appeared he had matched a Division I record with six sacks. The NCAA later ruled his two strip-sacks had to be counted as running plays instead.

“They didn't recruit me because I was undersized," Anudike-Uzomah said of the Jayhawks, “so that's basically the fuel I'm going to use. I used that last year and got a sack against them.”