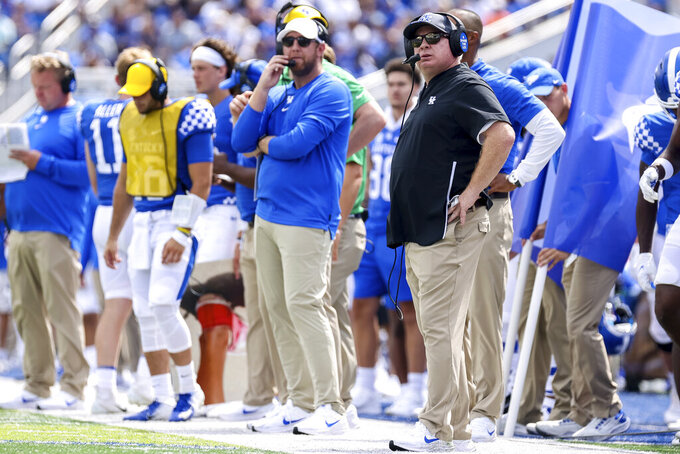 Kentucky head coach Mark Stoops, right, watches his team on the video board during the first half of an NCAA college football game against Louisiana-Monroe in Lexington, Ky., Saturday, Sept. 4, 2021. (AP Photo/Michael Clubb)

LEXINGTON, Ky. (AP) — Sitting atop the SEC East for one week is enough motivation for Missouri and Kentucky to get up for their meeting this weekend.

As the rest of the Southeastern Conference continues with nonconference tune-ups, the Tigers and Wildcats matchup will determine the initial division leader (at least until perennial heavyweights Georgia and Florida get going). With both teams intent on reshuffling the East pecking order, Saturday night’s meeting is an opportunity to make an early statement.

“Let’s get this party started,” Missouri coach Eli Drinkwitz said this week. “I think it’s gonna be a challenge for us. ... Just handling the mechanics of communication and handling the nerves and not letting the crowd dictate how we play.

“We’re going to have our work cut out for us and see what we’re made of.”

Kentucky and Missouri, picked to finish third and fourth respectively in the SEC East in a preseason media poll, aim to follow up season-opening wins that followed opposite paths.

The host Wildcats unveiled their new pro set offense with a bang to thump Louisiana Monroe 45-10. Newcomer Will Levis lived up to billing with a dozen completions of at least 19 yards on the way to career highs of 367 yards passing and four touchdowns as Kentucky racked up 564 overall.

The goal now is maintaining that intensity and avenge last October's 20-10 loss in Columbia, arguably its flattest effort of 2020. Kentucky was outgained 421-145 and manhandled throughout that day in having a five-game series winning streak stopped.

“That is uncharacteristic, and I don’t particularly like that,” Kentucky coach Mark Stoops said. “We need to be much more physical this year.”

The Tigers worked long and hard to earn a 34-24 victory against Central Michigan. It wasn’t pretty, and Mizzou and looks to improve on that shaky performance.

That won’t be easy against Kentucky, which allowed ULM just 87 yards. Then again, the Tigers are a step up talent-wise and aim to show it to grab the early lead of a tough division.

“We’re going to find out how much improvement we made from Week One,” Drinkwitz added. “And regardless, if you win, you’re 1-0 in the SEC with seven to go.”

Some other things to watch as Missouri and Kentucky open SEC play:

Kentucky enters leading FBS in total defense after a fierce debut. After allowing ULM to turn an early interception into a 43-yard TD drive, the Wildcats held the Warhawks to just 44 yards and a field goal after that. They didn’t force a turnover but recorded six sacks, pretty good considering several youngsters took on bigger roles.

Missouri senior back Tyler Badie leads SEC rushers with 203 yards after a career best performance against CMU. He also caught three passes for 40 yards and one of his two TDs, putting him within 141 yards of becoming the Tigers’ first 1,000-yard career rusher and receiver. He has 1,339 yards on the ground.

Levis’ timing needs work, but he executed new coordinator Liam Coen’s system well enough to lead Kentucky to its best passing performance in recent memory. Its 419 yards were the most since gaining 422 against UT Martin in 2014. Receivers Josh Ali and Nebraska transfer Wan’Dale Robinson (two TDs) each posted 100-yard efforts, while Chris Rodriguez Jr. chipped in 125 yards and a TD rushing. The Wildcats’ challenge is duplicating it against higher-level opponents and avoiding the three turnovers they were fortunate didn't affect the outcome.

Graduate transfer linebacker Blaze Alldredge seemingly lived in CMU’s backfield last week as he posted six tackles for loss with 3.5 sacks for 32 yards in his Tigers debut. He leads FBS in all three categories.

Kentucky leads 7-4, including 5-4 since Mizzou joined the SEC in 2012. All four Tigers victories have been by double-digit margins, while three of the Wildcats' five recent wins have been by eight points or fewer.