The Latest: Iowa football on hold but still preps for bowl 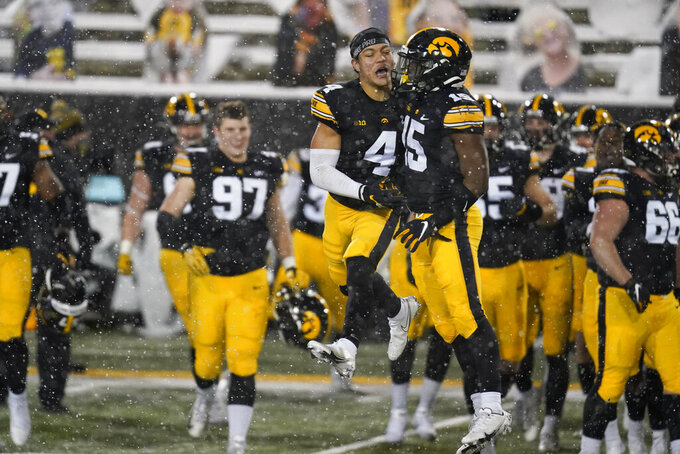 No. 17 Iowa says it's pausing football activities because of a COVID-19 outbreak but still hopes to play in next week's Music City Bowl.

Athletic director Gary Barta said in a statement Monday that the Hawkeyes will put all football activities on hold for at least five days because of an increase in positive cases.

Iowa is scheduled to play Missouri in the bowl game in Nashville, Tennessee, on Dec. 30.

Coach Kirk Ferentz says he met with team leaders “and they overwhelmingly want to play in the bowl game.” He says they'll continue to prepare “using the technology we have available.”

The Hawkeyes lost their first two games but finished the regular season with six straight wins. A game against Michigan scheduled for this past Saturday was canceled. Missouri is 5-5.

UC San Diego women’s basketball team will have to wait before it can play its first game as a Division I program.

The Tritons’ game on Monday against California Baptist was canceled at halftime due to coronavirus testing concerns. Prior to the cancellation, the Tritons led 28-25.

Because the game didn’t reach the 30-minute mark, it didn’t qualify as official.

The San Diego Union-Tribune reported that a Cal Baptist player had a false positive test last week, but had received two subsequent negative results. One of those tests was a PCR (nasal swab) test and the other a rapid antigen test. The Big West requires both tests be PCR.

The player was given a PCR test. However, results weren’t immediately available and the game was canceled, the Union-Tribune reported.

There are seven new positive tests in the latest round of English Premier League checks for the coronavirus.

The unnamed players or club staff have to self-isolate for 10 days.

The Syracuse and Buffalo men's basketball programs are on pause after a member of the Bulls tested positive for COVID-19.

The decision by both teams comes after they played Saturday in the Carrier Dome in Syracuse.

The Mid-American Conference school did not reveal who tested positive, except to say it involved either an athlete, or member of the team’s coaching or support staff. The school was notified of the positive test on Sunday.

It’s unclear how long the Buffalo pause will last, with the school saying it will follow NCAA, conference and local health protocols. Contact tracing is underway at Syracuse.

Syracuse postponed it game Tuesday against Notre Dame. Buffalo is scheduled to play non-conference games at St. Bonaventure on Tuesday, followed by a trip to West Virginia on Dec. 29.

The Bulls are already without head coach Jim Whitesell, who entered a 14-day self-quarantine period on Dec. 14 after coming into close contact with a person who has tested positive for COVID-19.

The Military Bowl has been canceled after a host of teams opted not to play in bowl games this season.

The announcement was made Monday. The bowl game has been held annually in the Washington-Maryland area since debuting in 2008.

Organizers of the bowl last week announced plans to stage the game on Dec. 28 at Navy-Marine Corps Memorial Stadium in Annapolis, Maryland, without fans.

The bowl matches teams from the Atlantic Coast Conference and the American Athletic Conference.

The Military Bowl joins an expansive list of bowl games that have been canceled in the wake of the coronavirus pandemic.

The English League Cup final has been moved from February to April in hope fans will be able to attend at Wembley Stadium.

The English Football League on Monday said the final was pushed back from Feb. 28 to April 25.

A new, tougher fourth tier of coronavirus restrictions for London and south-east England came into force on Sunday. Spectators are banned from sporting events in tier three and four.

"The number of fans permitted will be dependent on government guidance in place at the time and it is hoped that moving the date to later in the year will give clubs and their fans the best opportunity to attend in person,” the EFL said in a statement.

The quarterfinals are on Tuesday and Wednesday.