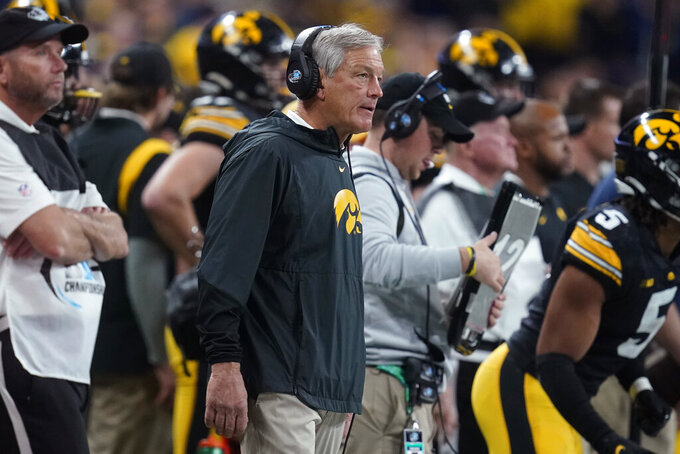 FILE - Iowa head coach Kirk Ferentz watches from the sideline during the second half of the Big Ten championship NCAA college football game against Michigan, Saturday, Dec. 4, 2021, in Indianapolis. Kentucky will be trying for a rare 10-win season when the Wildcats play Iowa in the Citrus Bowl. (AP Photo/Darron Cummings, File)

IOWA CITY, Iowa (AP) — The nation's longest-tenured FBS head coach plans to stick around a lot longer as the University of Iowa on Friday announced it was extending Kirk Ferentz's contract through the 2029 season.

Iowa athletic officials announced the four-year extension that followed a 10-4 record in 2021. It was Ferentz's 23rd season at Iowa.

The university said Ferentz would be paid $7 million a year, which includes a $500,000 base plus $5.5 million in supplemental compensation and a $1 million “longevity bonus." The contract will expire on Jan. 31, 2030.

“Kirk’s consistent leadership and success over 23 years has been amazing and appreciated as he has led our football program in a first-class manner,” athletic director Gary Barta said in a statement.

Ferentz has 178 career wins, placing him first for victories at Iowa and fourth in Big Ten Conference history.

This season ended in a 20-17 loss to Kentucky in the Citrus Bowl.