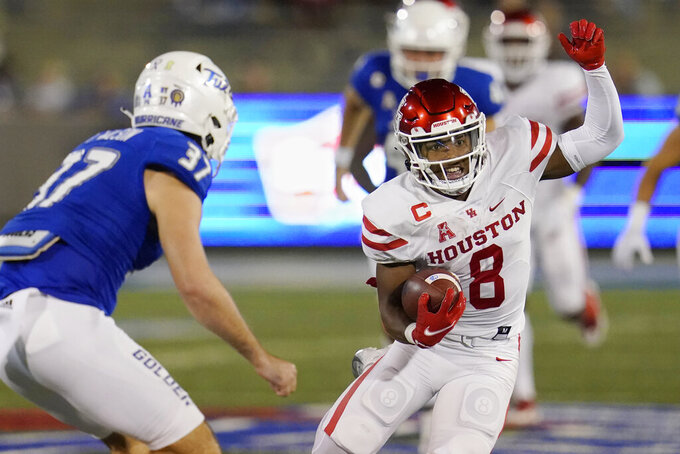 TULSA, Okla. (AP) — Freshman Alton McCaskill scored a career-best three touchdowns — all in the first half — and Clayton Tune passed for 241 yards and a pair of scores as Houston defeated Tulsa 45-10 on Friday night.

McCaskill, who gained 77 yards on 17 carries, scored twice from the 1-yard line and added a 27-yard burst up the middle that included a pirouette at about the 15 as he broke through the final defenders. He had previously scored two touchdowns each in wins over Rice and Grambling.

Tulsa's first four possessions resulted in two punts, a turnover on downs and an interception. The Hurricanes never got on track, with 27 yards rushing, three turnovers and 11 penalties for 119 yards.

Two plays after a pass interference penalty on Houston kept a Tulsa drive alive, Davis Brin found Ezra Naylor II deep over the middle on a 41-yard scoring pass as the Hurricanes cut the gap to 42-10 late in the game.

Brin completed 20 of 39 passes for 258 yards with a touchdown against three interceptions. He was sacked four times for a loss of 40 yards.

Just before halftime, Tulsa's Jaise Oliver intercepted Tune, resulting in an 11-play 65-yard drive ending with a 33-yard Zack Long field goal as the Hurricanes went into the break trailing 28-3.

Tulsa (1-4, 0-1) opened the second half with the ball, but held it for only three plays before Brin was picked off by Houston's Gervarrius Owens, who returned it 45 yards for a Cougars touchdown.

Owens caught a tipped pass and picked up a convoy of blockers as he returned it along the right sideline for the score.