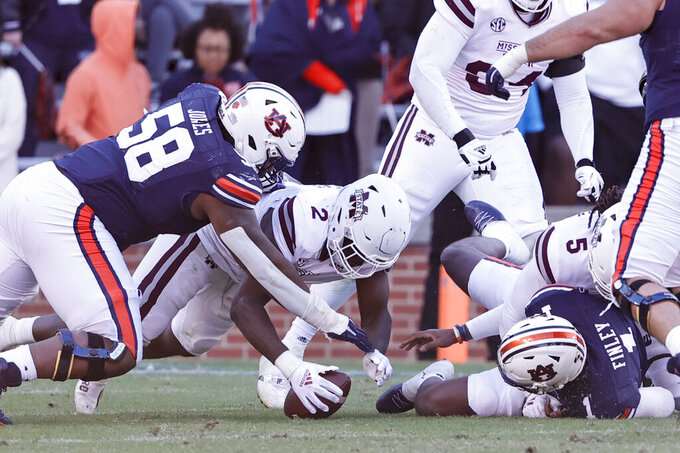 Mississippi State is playing its best football, and coach Mike Leach wants his team to keep their feet on the gas.

The Bulldogs (6-4) have won three of four and are coming off their biggest comeback in school history against then-No. 17 Auburn. Saturday's inaugural meeting against FCS Tennessee State (5-5) offers a break from the Southeastern Conference grind, but Leach wants to maintain progress after MSU’s third victory over a ranked opponent this season.

“We are a group that kind of rollercoasters up and down,” he said. “We’ve got to keep building it well.”

The Bulldogs became bowl eligibility for the 12th consecutive season and are on track to match their highest regular season win total (eight) since 2018.

In terms of explosiveness, Leach’s Air Raid offense might be hard pressed to top last week’s record-setting 43-34 rally past the Tigers. Trailing 28-3 midway through the second quarter, they erupted for 40 unanswered points against the Tigers.

MSU quarterback Will Rogers threw a school-record six touchdown passes and totaled 415 yards to extend his nation-leading streak of 300-plus-yard games to eight. He remains the SEC passing leader, and the coach noted his steady growth and those around him.

“He’s got a little improvement himself,” Leach said of Rogers. “I think we are protecting better. The receivers are more in tune with him. We have improved in other phases, which I think makes him look like he has improved, which he has.”

Next up is TSU, which has improved under former NFL Tennessee Titans great Eddie George from last year's 2-5 finish.

The Ohio Valley Conference school still has a way to go after being outscored 77-27 in consecutive losses to UT Martin and Austin Peay. Now comes the tall task of slowing the Air Raid, which George joked has caused sleepless nights for the coaching staff.

“The offensive explosion is there, for sure,” he said. “That being said, it’s going to offer some opportunities for our kids to try to create turnovers, tip balls, get to the quarterback.

“We’ll try to put together (and) devise a plan to know where we have to be patient, make them put good drives together and not give up explosive plays, but is a great test for our defensive staff and certainly for our defense.”

Last week marked Will Rogers’ second consecutive 400-yard performance and fourth this season. The MSU quarterback wasn’t sacked for the first time this season, allowing him to post his fifth outing with at least 40 completions along with setting the single-game TD mark. His 3,722 yards passing top the SEC and rank second in FBS behind Western Kentucky’s Bailey Zappe (4,195).

George lost both his starting quarterback, graduate transfer Geremy Hickbottom, and running back Devon Starling to injuries in last week’s 36-7 loss to Austin Peay. Hickbottom leads the OVC in passing efficiency and has thrown for 12 touchdowns with only four interceptions but is dealing with a back injury that could keep him out of the season finale.

“We’re preparing some guys now to take over the quarterback duties for Saturday,” George said.

The Bulldogs rank third in the SEC and 11th nationally in rushing defense, yielding just 102.5 yards per contest. They’ve also allowed just 158 first downs to stand second in the league and seventh in FBS.

TSU is 5-8 all-time against FBS opponents, though only 1-5 as an OVC member. Its last win over an FBS program came in 2017 at Georgia State. An OVC team has upset an FBS opponent in seven of the last 11 seasons and is 36-258-1 all-time against the upper division. This is the OVC’s last chance this season to add another win to that column.