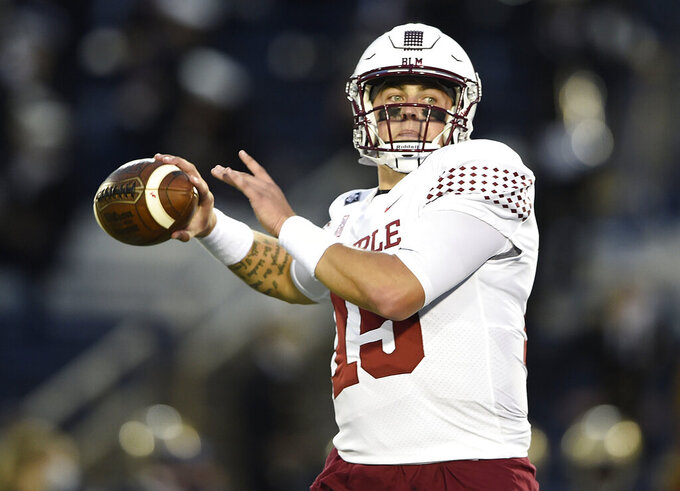 FILE - In this Oct. 10, 2020, file photo, Temple quarterback Anthony Russo looks for a receiver during an NCAA college football game against Navy in Annapolis, Md. Michigan State still has uncertainty at quarterback, and coach Mel Tucker is in no rush to clarify it. Russo, a transfer from Temple, joins the mix this offseason, and Payton Thorne is back after playing four games as a redshirt freshman. (AP Photo/Gail Burton, File)

Anthony Russo went through plenty of change during his five seasons at Temple.

Now he's ready for a new adjustment — not just a new coach, but an entirely new school.

Russo is at Michigan State now, competing to be the Spartans' starting quarterback as they prepare for coach Mel Tucker's second season in charge. Michigan State still has a holdover with some experience in Payton Thorne, but Russo's arrival has created some real intrigue — and he did not sound too concerned about his ability to hit the ground running.

“I definitely have been in a few different systems, which I think definitely has worked to my advantage a little bit," Russo said earlier this month. "I don’t think there’s many pass concepts and run plays and different things that I haven’t seen at this point — being in, this is my fourth offense now in five and a half years.”

Michigan State went 2-5 in the pandemic-shortened 2020 season. Rocky Lombardi started six of those games at quarterback, but he's at Northern Illinois now. The Spartans brought in Russo as a graduate transfer after he felt he needed a change from Temple.

“I didn’t feel that I was progressing both on and off the field as a quarterback,” Russo said.

Matt Rhule was Temple's coach when Russo redshirted there in 2016. Since then, Geoff Collins and Rod Carey have spent time coaching the Owls. Russo started 26 games at Temple and is third on the career list there in yards passing, touchdown passes and completions.

He has less time to leave his mark at Michigan State, but he made it clear his new program has a lot to offer him.

“Pro-style pass concepts, pro-style run game — everything that I’ve kind of been looking for in an offense," Russo said. "I knew, with one year of eligibility left and my goal to play in the NFL, that in order to increase my chances of doing that, I had to put myself in an opportunity that I was going to be in an offense that was similar to the next level.”

Thorne was the only other quarterback to start a game for Michigan State last season besides Lombardi. While Russo brings experience, Thorne — who will be a redshirt sophomore in the fall — has more eligibility remaining. He threw for 325 yards and three touchdowns in a December loss to Penn State. That yardage total was a school record for a freshman and for a quarterback in his first start.

Now Lombardi is no longer with the Spartans, but Russo has arrived to challenge Thorne.

“I think that the competition brings out the best in a lot of guys, and you got a decision to make when a guy’s coming in like that in how you’re going to respond to it," Thorne said. "I think that you got to respond to it in a certain way, and you just got to put your head down and work.”

Michigan State's spring game is Saturday, although it is expected to be more like a practice with drills and scrimmage periods. A limited number of spectators are allowed.

The fans probably shouldn't spend too much time overanalyzing the quarterbacks. Tucker sounds like he's willing to be very patient before expecting more clarity on that situation.

“They’re just competing and working to get better. It hasn’t shaken itself out yet," Tucker said. "It’s really too early for that to happen. I really like the progress that they’ve made, they’re working really hard and guys are getting better.”