New Badgers coach Fickell begins by reaching out to players 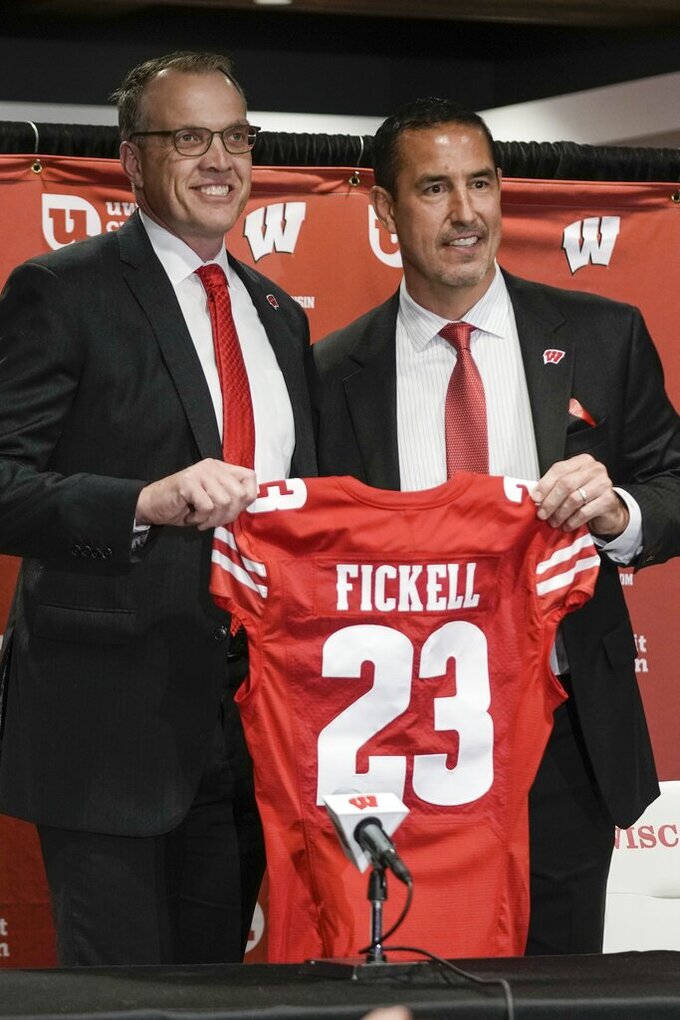 MADISON, Wis. (AP) — Wisconsin coach Luke Fickell spent much of his first day on the job speaking to his new players, knowing many of them had hoped this search would have a different outcome.

His message to them was sympathetic but direct.

“Change is inevitable,” Fickell said Monday during a welcome event before his introductory news conference. “The growth is what’s optional. I’m willing to grow.”

Yet his immediate challenge will be winning over a roster featuring many players who weren’t shy about saying they wanted this job to go to Jim Leonhard, the former Wisconsin defensive coordinator who went 4-3 as the Badgers’ interim head coach after the Oct. 2 firing of Paul Chryst.

Fickell, 49, takes over a Wisconsin program that hasn’t won a Big Ten title since 2012 and must win its bowl game to avoid its first losing season since 2001.

Wisconsin hasn’t indicated its staffing plans for the bowl game, though Fickell said he and Leonhard had started talking it over.

“I’ll be coaching in some way, shape and form,” Fickell said. “We’ll figure out what that means.”

The hiring of Fickell represents a second stunning move by McIntosh, who took over this job last year after the retirement of Barry Alvarez.

First McIntosh fired a coach who had won 72% of his games, though Chryst had gone just 15-10 since 2020 and was off to a 2-3 start this year. Then he passed up the opportunity to make Leonhard the permanent replacement and instead spent big to bring in Fickell, who has a much more proven track record.

Leonhard is a former Wisconsin walk-on who developed into an All-American safety, played 10 years in the NFL and gained a reputation as one of college football’s top defensive coordinators. McIntosh praised Leonhard’s performance as interim head coach, called him “part of the DNA of this program” and said he gave him “very strong consideration” before deciding on Fickell.

“It became evident that Luke and his experience and his belief system and his approach and his process, which was proven and does align with what we believe here, was the way that I felt we should go and the way I felt best positioned our program for long-term success,” McIntosh said.

Fickell can identify with Leonhard’s circumstances, having gone 6-7 as the interim head coach at his alma mater in 2011 after the exit of Jim Tressel and before the arrival of Urban Meyer at Ohio State. Fickell said he’s open to the possibility of including Leonhard on his staff if there’s mutual interest.

But he noted that Leonhard figures to have plenty of options.

McIntosh said he did apologize to Wisconsin’s players this season for all they’ve endured. Dozens of them attended Monday’s public welcome for Fickell.

Many players expressed their disappointment over the firing of Chryst back in October before calling for Leonhard to get the job. They’ve also dealt with tragedy off the field, as former running backs coach Gary Brown died in April and former teammate Devin Chandler was one of three Virginia players killed in a shooting earlier this month.

“The experience that these kids on this team had this year isn’t one that I would wish on anyone,” McIntosh said. “It’s been extremely difficult. That’s why I said earlier how proud of the approach they took. When we met with them last night, I recognized it and I apologized for decisions I have made this season that have contributed to the challenges of this season. That just can’t be overlooked. It’s been the hardest part for me and it’s clearly been hard on these players, on these student-athletes.”

Wisconsin is counting on Fickell to help the program move forward and get back to competing for titles in a Big Ten that should get much more competitive with Southern California and UCLA arriving in 2024.

Fickell has referred to Wisconsin as a destination job. He appreciated Wisconsin’s program while competing against it as a player and coach. He can’t wait to lead it.

“I’m incredibly excited to get started,” Fickell said. “We can’t get this thing rolling fast enough.”