No. 14 Coastal Carolina eager to shine in national spotlight 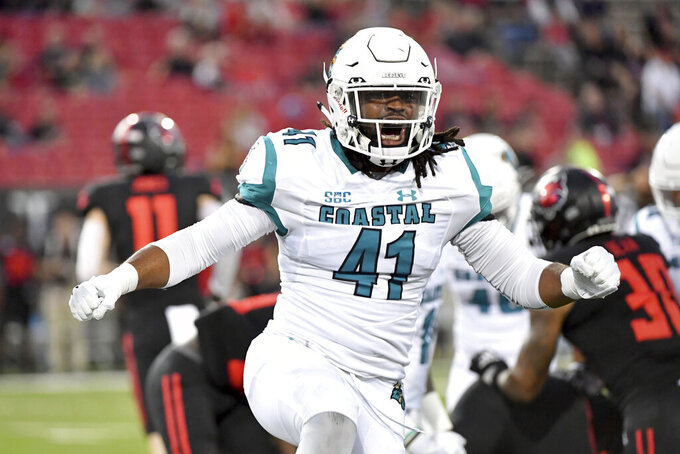 Coastal Carolina's Myles Olufemi (41) reacts after making a tackle against Arkansas State during the first half of an NCAA college football game Thursday, Oct. 7, 2021, in Jonesboro, Ark. (AP Photo/Michael Woods)

BOONE, N.C. (AP) — While Coastal Carolina is unbeaten and ranked 14th in the nation, head coach Jamey Chadwell knows there are still plenty of skeptics who don’t believe the Chanticleers belong among college football’s elite.

That’s one of the reasons Caldwell is embracing a chance to play a Wednesday night game against traditional Sun Belt Conference power Appalachian State in a game that will be broadcast on ESPN2.

“We will be the only show in town,” Chadwell said. “So that is huge for us to have a chance to be on national television and let everybody have all of their eyes on us and see what we’re all about, right?

Coastal Carolina went 11-0 last season and won the Sun Belt Conference before losing to Liberty in a bowl game.

This year the Chanticleers are off to a 6-0 start, but their wins have come against the likes of The Citadel, Kansas, Buffalo, Massachusetts, Louisiana-Monroe and Arkansas State. They’ve outscored their opponents 293-90.

With the exception of a 28-25 win at Buffalo, all of their games have been blowouts.

“Everybody is questioning whether we are good or not because of our perceived lack of schedule strength,” Chadwell said. "So I think that great for us to have a chance to showcase what we’re about.”

The Mountaineers (4-2, 1-1 Sun Belt) were receiving votes in the Top 25 poll until turning the ball over four times and getting clobbered 41-13 by Louisiana-Lafayette last week, the program's worst loss since 2014.

And App State is traditionally tough at home, where they have never lost to Coastal Carolina.

The Mountaineers won four straight Sun Belt titles from 2016-19, so they have plenty of players with playoff experience, too.

PLENTY ON THE LINE

Both teams have much at stake. The game will go a long way toward determining who wins the East Division and gets to advance to the Sun Belt Conference championship game at the end of the season.

“We have to let that (Louisiana-Lafayette) game go,” App State head coach Shawn Clark said. “We can't get it back. The good thing is all of our goals are still in front of us — to win the East. Whoever wins this game will be in the driver’s seat.”

“You live for games like this,” Heiligh said. “This is what you want when you accept a role in college football.”

Chadwell said one of his biggest concerns is stopping the Mountaineers' running game which is led by Nate Noel and Camerun Peoples, who is expected to return to the lineup after missing the last two games with an injury.

Before his injury, Peoples ran for 353 yards and eight touchdowns in four games, including three scores against Marshall.

Coastal Carolina is giving up more than 130 yards per game on the ground.

The Chanticleers have been productive on offense all season, scoring at least 49 points in five of their six games.

“The schemes we have, you can really do a lot of things with your offense,” Heiligh said. Defenses “can’t focus on one certain thing. We can crowd the box, spread the ball and do a lot of things using our different skillsets. That’s why we are so explosive.”

Coastal Carolina senior tight end Isaiah Likely is coming off the game of his life, catching eight passes for 232 yards and four touchdowns in a 52-20 win over Arkansas State on Oct. 7 becoming the first tight end in Sun Belt history to catch four TD passes in a game.

Likely has 27 catches for 513 yards and eight touchdowns this season while averaging 19 yards per reception.

Coastal Carolina is getting a big season from quarterback Grayson McCall, who leads the nation in completion percentage (79.8) and has 14 TD passes and just one interception.