No. 14 Washington and California resume after weather delay 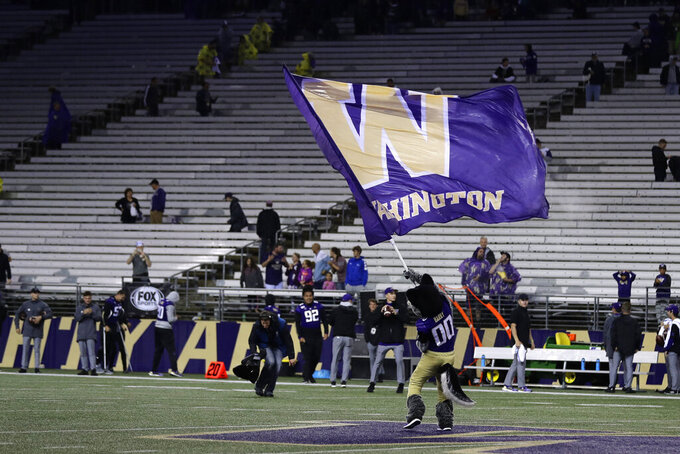 Harry, the Washington Huskies' mascot, waves a rain-soaked "W" flag after an announcement that play would resume following a delay for severe weather during the first quarter of the team's NCAA college football game against California, Saturday, Sept. 7, 2019, in Seattle. (AP Photo/Ted S. Warren)

SEATTLE (AP) — No. 14 Washington's game against California has resumed after a delay of more than 2 ½ hours on Saturday night due to severe weather in the Seattle area.

The game was stopped shortly before 8 p.m., with 9:46 remaining in the first quarter, and resumed at 10:30 p.m. According to the National Weather Service, severe thunderstorms and lightning were moving from the south toward the Seattle metro area.

Teams cleared the field and fans sitting in metal bleacher sections of Husky Stadium were encouraged to seek shelter.

The storms moved swiftly into the area. Within minutes of the delay, lightning was flashing in the sky. Fans were removed from the open bleachers of the stadium and huddled under cover or in the concourses of the stadium.

The game was scoreless.