No. 17 USC, Washington State return from layoffs at Coliseum 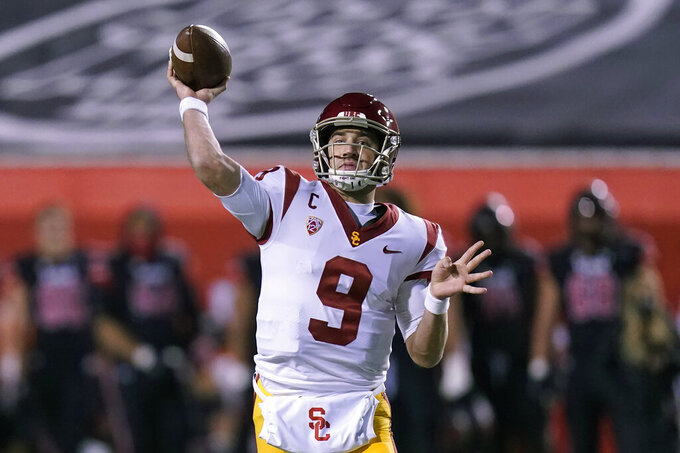 The Trojans can stay on track to win the Pac-12 South by defeating the Cougars for the 30th time in the past 34 meetings in Los Angeles. Washington State has been surprisingly competitive in its first two games under new coach Nick Rolovich, and knocking off USC would give the new regime a signature win. Both teams will be thrilled to play following a series of cancellations because of COVID-19. USC did not play against Colorado last week, while Washington State had its past two games scuttled and hasn’t competed since Nov. 14.

Washington State quarterback Jayden de Laura against Drake Jackson and USC’s defensive line. Despite being the first freshman to start a season opener for the Cougars, de Laura has shown a knack for avoiding the big mistake. He’s been sacked just twice and thrown one interception through two games. Jackson continues to be a game-wrecker with three tackles for loss and two sacks, but his interception at Utah after dropping into coverage showed another side of the sophomore’s impressive athleticism.

WSU: RB Max Borghi could make his season debut this week after sustaining a back injury in training camp. Borghi was one of the most versatile backs in college football when Mike Leach was coaching on the Palouse, rushing for 817 yards and 11 touchdowns and catching 86 passes for 597 yards and five touchdowns last season.

USC: QB Kedon Slovis hasn’t looked right, but he continues to put up good numbers in the Air Raid offense, ranking seventh in the FBS in passing yards per game (323.3) and ninth in completion percentage (70.7%). Slovis needs to be sharper in the red zone to finally turn that yardage into touchdowns. He will also have to manage the game well, as there could be absences on the offensive line.

USC is playing on Sunday for the fifth time. The Trojans split the previous four, which were all season openers. … USC has scored 11 touchdowns in 20 red zone opportunities. … Washington State WR Renard Bell (109) and Travell Harris (100.5) lead the Pac-12 in yards receiving per game. … Slovis has thrown multiple touchdown passes in 12 of his 14 careers starts, including 5 of 6 starts at the Coliseum.