No. 2 Ohio St looking to stay perfect against No. 13 Penn St 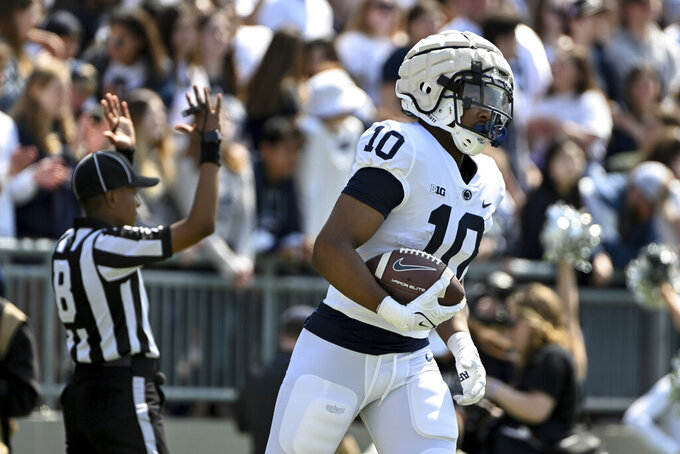 Line: Ohio State by 15 1/2, according to FanDuel Sportsbook.

The Buckeyes are looking to stay perfect while the Nittany Lions are trying to stay alive in the Big Ten East. Having already dropped a game to Michigan, a loss would almost certainly end Penn State’s division title hopes. The Nittany Lions always seem to give the Buckeyes their best, however. The last six games have been decided by an average of 6.3 points.

Penn State secondary vs. Ohio State passing offense. C.J. Stroud is one of FBS’s sharpest passers, but Penn State’s secondary is full of ball hawks who excel in tight coverage. The Lions have broken up a nation-best 58 passes, intercepted seven and been called for pass interference just five times.

Ohio State: Stroud completed 20 of 30 passes for 286 yards and four second-half touchdowns in a 54-10 win over Iowa last week. He leads the nation with 28 touchdowns, a 203.9 passing efficiency and has been responsible for 168 points overall.

Penn State: RB Nick Singleton. The freshman has shared the backfield with Kaytron Allen all season. Allen’s been steady, but Singleton is the greater big-play threat. He’s got four touchdown runs of 30 yards or longer.

Both teams are ranked in the AP Top 25 for the sixth consecutive meeting. ... Ohio State has won five consecutive games over Penn State and nine of the last 11. Fourteen of the 38 games in the series have been decided by a touchdown or less. ... Stroud is the first Big Ten quarterback in history to have three games with six touchdown passes. ... The Buckeyes have the second-ranked defense in the country, allowing 239.9 yards per game. … Ohio State is the only offense with perfect red-zone efficiency. It has scored on all 36 trips into the red zone, including 31 touchdowns. ... Penn State safety Ji’Ayir Brown has three of his nine career interceptions this season. … WR Parker Washington leads the Nittany Lions with 30 catches for 388 yards.