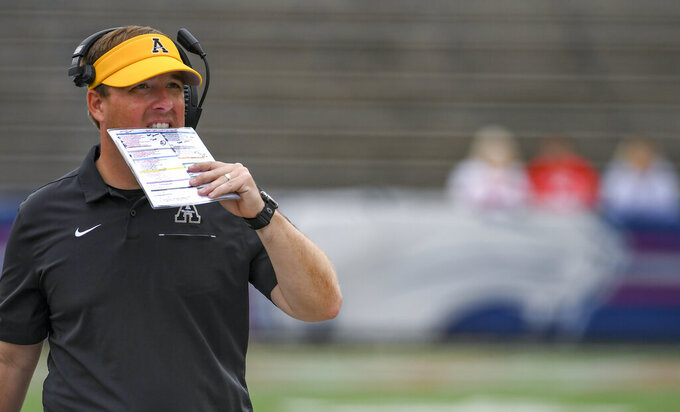 Appalachian State head coach Eliah Drinkwitz paces the sidelines during the second half of an NCAA college football game against South Alabama, Saturday, Oct. 26, 2019, at Ladd-Peebles Stadium in Mobile, Ala. (AP Photo/Julie Bennett)

The Mountaineers are ranked in the AP Top 25 for the third straight week, a Sun Belt Conference record. They've won 13 straight games, the third-longest winning streak in the country behind Clemson and Ohio State. They'll be looking for a little revenge against Georgia Southern, which beat them 34-14 last season to knock them out of the poll. This game could go a long way toward determining who goes to the conference championship game.

Georgia Southern's running game vs. Appalachian State's defense. The Mountaineers' defense has been dominant the last three games, allowing just 5.6 points per game. But they will be tested by a run-heavy Georgia Southern team that is averaging 259.8 yards per game on the ground. The Eagles have run for 14 touchdowns on the season and thrown for only two.

Appalachian State: RB Darrynton Evans has run for 722 yards and 10 touchdowns this season.