No. 21 Colorado attempts to end 3-game losing streak to Utah 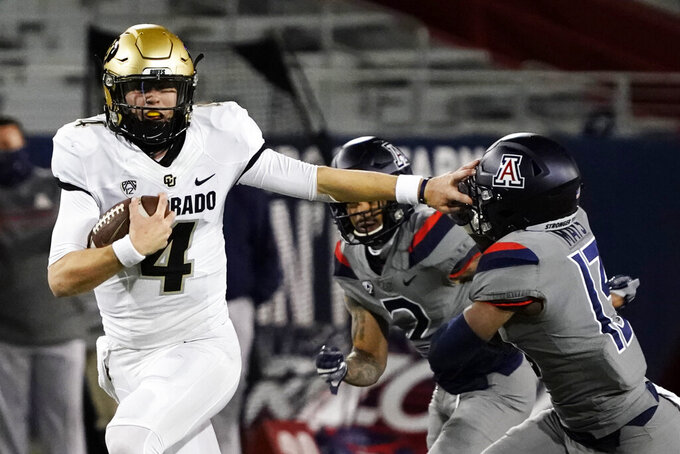 Originally slated to take place Friday, the game was moved to Saturday morning after the Michigan-Ohio State contest was canceled due to COVID-19 issues within the Wolverines' program. The 12:05 p.m. Eastern kickoff marks the earliest kickoff in Folsom Field’s 97-year history, the school said. Utah is about to be unseated as Pac-12 South champions. But the Utes can have a say in the race by knocking off Colorado. The Buffaloes need to win and have UCLA beat No. 16 Southern California to claim a spot in the Pac-12 title game. Colorado’s game at USC was canceled on Nov. 28 due to virus concerns within the Trojans program.

Utah freshman tailback Ty Jordan is coming off a 167-yard rushing performance in a 30-24 win over Oregon State. He will face a stout Colorado defense led by linebackers Nate Landman and Carson Wells. Landman has been nominated by the team for Pac-12 defensive player of the week honors in three of the last four games. He earned the award after his 17-tackle performance at Stanford on Nov. 14.

Utah: Safety Vonte Davis. The senior has two of Utah’s five interceptions this season. He has 11 total tackles.

Colorado: Tailback Jarek Broussard ran for 301 yards in a 24-13 win at Arizona last weekend. It was Broussard’s fourth straight 100-yard game and just the fourth 300-yard game in Colorado history.

The Utes have outscored Colorado 109-35 during their three-game win streak over the Buffaloes. ... Grad transfer QB Jake Bentley has started the last two games for the Utes. He’s thrown for 489 yards and three touchdowns this season. He’s also been picked off four times. ... All-Pac-12 junior tight end Brant Kuithe leads the team in receptions (16) and yards receiving (122) . ... Colorado is one of nine undefeated teams heading into the final two weeks of the regular season. ... Karl Dorrell is the fifth head coach in school history to start 4-0 in his first season. ... QB Sam Noyer has completed 62.1% of his passes for 742 yards. He’s thrown four TD passes and four interceptions.