No. 22 Mississippi to start Altmyer vs Central Arkansas, 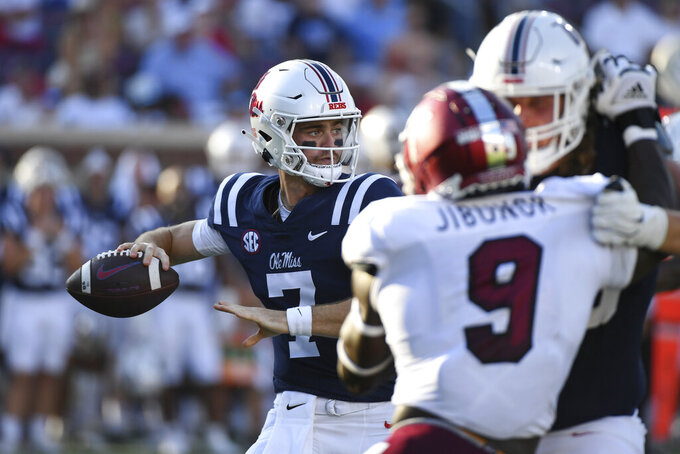 Ole Miss plays a FCS team ahead of its first road trip and presumably stiffer competition, at Georgia Tech. It's another chance for the Rebels to shake out their quarterback situation before bigger games. Central Arkansas is trying to improve on its 3-15 record against FBS teams since moving up to Division I in 2006 and beat a Southeastern Conference team for the first time in four tries.

The Central Arkansas defense has to try to slow down Zach Evans and the Ole Miss running game. The Rebels averaged six yards on 44 carries against Troy, racking up 266 yards and three touchdowns on the ground. Evans was the biggest star with 130 yards but freshman Quinshon Judkins ran for 87 and a touchdown and Ulysses Bentley IV could get more chances too.

Central Arkansas: RB Darius Hale opened the season with a 99-yard game. He rushed for 1,015 yards and 17 touchdowns as a freshman. Hale was runner-up for the Jerry Rice Award, given to the top FCS freshman.

Ole Miss: QB Luke Altmyer is set to get his starting turn after USC transfer Jaxson Dart got the nod in the first game. Altmyer attempted only two passes against Troy, completing one for 13 yards.

The Rebels' 10-game home winning streak is the longest in Oxford since winning 33 in a row from 1952-64. ... Central Arkansas actually led 20-14 at halftime in these teams' only other meeting, a decade ago. Ole Miss wound up winning 49-27, a victory later vacated for NCAA violations. ... Ole Miss played 27 new players in the opener against Troy, including nine first-time starters. ... Ole Miss LB Khari Coleman became only the third Rebel since 1999 to record five tackles for loss in a game. The Rebels scored touchdowns on all four trips inside Troy's 20-yard line.