No. 6 Clemson leaning on defense early in the season 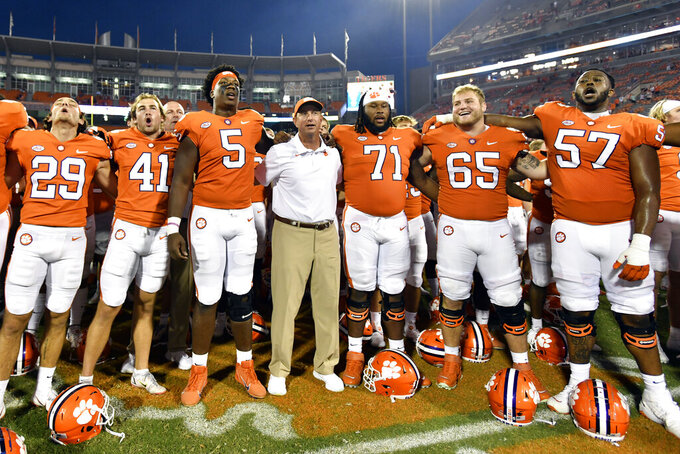 CLEMSON, S.C. (AP) — Clemson's defense has come out strong this season and may provide the sixth-ranked Tigers their best path toward staying on top in the Atlantic Coast Conference while their offense gets untracked.

Clemson hasn't allowed a touchdown through two games, something it last accomplished in 2017 with All-Americans Christian Wilkins and Clelin Ferrell leading the way.

The Tigers limited Georgia and South Carolina State to just a field goal on offense. Georgia's touchdown in a 10-3 victory in Week One came on a interception return for a score.

“Holding the offenses out of the end zone two straight weeks, it’s not an easy thing to do, regardless of who you’re playing,” Tigers defensive coordinator Brent Venables said.

Defensive tackle Ruke Orhorhoro saw this coming in the spring. It was a mix of players' eager to show the Tigers weren't the club that allowed 47 points in a loss at Notre Dame last November or gave up four straight TD passes in the first half to Ohio State's Justin Fields in a 49-28 playoff loss.

“After we came off that loss, just seeing guys here working out ... showed me that this team’s going to be special and that we’re ready to handle some business,” said Orhorhoro, a sophomore who has found a spot in the regular rotation on a defensive line with seven players who have starting experience. “We're motivated by winning and just the joy of winning drives us even more.”

Clemson's defense was the brightest spot in the team's first season opening loss in seven years.

Georgia's offense is expected to be one of the country's best this season, headlined by Southern Cal transfer JT Daniels at quarterback.

The Tigers held Daniels to 135 yards passing with an interception. The Bulldogs' celebrated run game also struggled with just 121 yards on 31 carries.

Clemson was just as dominant last week in holding South Carolina State of the FCS to a field goal. South Carolina State managed just 235 yards and only 103 on the ground. With Clemson up by 40-plus points and the Bulldogs driving for a feel-good late TD, Tigers reserve linebacker Keith Maguire broke up a fourth-down pass at the goal line.

The Tigers' defensive starters erupted on the sidelines after the backups kept the no-touchdown run alive.

“The effort was tremendous,” Clemson coach Dabo Swinney said. “We had no penalties, so we had good discipline. No touchdowns allowed.”

Clemson opens Atlantic Coast Conference play at home Saturday against Georgia Tech. The Tigers are favored by more than four touchdowns as they look for their seventh straight win in the series.

The Yellow Jackets scored points all five times they reached the opponent's 20 yard line in a 45-17 victory over Kennesaw State. Clemson's defense will be much sterner test.

Clemson's Venables believes that, too, about his group, led by sixth-year super seniors in linebacker James Skalski and safety Nolan Turner. Both were part of the 2016 and 2018 national championship teams and have brought that mentality to this unit, Venables said.

“They're very driven. You can't raise the standard high enough for them,” Venables said. “That's awesome when you have that. You can't coach that. Guys either have it or they don't.”

Clemson has a lot of driven players. Defensive tackle includes junior Tyler Davis and sophomore Bryan Bresee, who combined for 11 1-2 tackles behind the line of scrimmage last year. Alongside Skalski at linebacker is fellow “Bruise Brother” in Baylon Spector, the team's top returning tackler.

Turner has missed the first two games, although he's not been diagnosed with an injury. Swinney expects him to play against the Yellow Jackets.

Having Turner back, Orhorhoro said, will be another boost to a defense filled with confidence and ready to show itself as the best in the country.

“Since the first day of spring practice, everybody's been balling out, playing hard,” he said. “That's really all it is.”