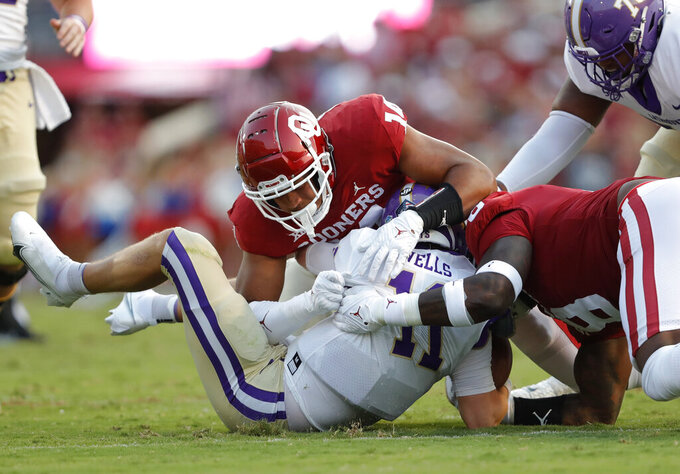 Line: Oklahoma by 11 1/2, according to FanDuel Sportsbook.

The Sooners have been underwhelming in their 4-0 start, but their first Big 12 road trip since announcing plans to bolt for the SEC gives them an opportunity to earn some style points. The Wildcats are coming off a loss at Oklahoma State in which they got behind early and could never get caught up.

Kansas State RB Deuce Vaughn against the Oklahoma run defense. Vaughn has 393 yards and five TDs rushing despite struggling last week in Stillwater, and now he faces a bunch of Sooners that allowed minus-6 yards rushing to West Virginia in the second half last weekend.

Oklahoma: DL Perrion Winfrey will be crucial to slowing down Kansas State's preferred run-first offensive style. He had a sack among three tackles last week against West Virginia, and he has at least a half-sack in all four games this season.

Kansas State: Whoever starts at QB. Skylar Thompson took warmups last week in Stillwater but remained out after hurting his knee against Southern Illinois. Will Howard was ineffective again in his place before getting banged up, leaving third-stringer Jaren Lewis to finish out the loss to the Cowboys.

The Sooners beat the Mountaineers last week on Gabe Brkic's 30-yard field goal as time expired. ... Oklahoma has won 12 straight, the second-longest streak in the nation and its longest since winning 14 games in a row in 2016 and '17. ... The Sooners surrendered just 62 yards to West Virginia in the second half last week. ... Oklahoma QB Spencer Rattler completed 15 of his final 16 pass attempts against the Mountaineers to help set up the winning field goal. ... Kansas State is trying to win its third straight against Oklahoma, its longest streak since winning five in a row beginning in 1993. ... Vaughn had his streak of consecutive 100-yard rushing games end at five last week against the Cowboys. ... Kansas State has 14 sacks to rank 14th nationally. ... The Wildcats had three non-offensive touchdowns in last year's win over Oklahoma. Phillip Brooks returned two punts for TDs and Justin Gardner had a pick-six. ... The Wildcats have rushed for at least 200 yards in five of their past six games.